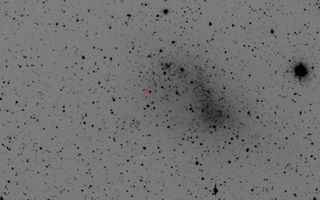 Image showing the location of the star HV 2112 — a hybrid between a red supergiant and a neutron star — in the Small Magellanic Cloud, a dwarf galaxy that lies about 200,000 light-years from Earth.
(Image: © Phil Massey, Lowell Observatory)

Astronomers have apparently discovered the first of a class of strange hybrid stars, confirming theoretical predictions made four decades ago.

In 1975, physicist Kip Thorne and astronomer Anna Zytkow proposed the existence of odd objects that are hybrids between red supergiants and neutron stars — the collapsed, superdense remnants of supernova explosions.

These so-called Thorne-Zytkow objects (TZOs) likely form when a red supergiant gobbles up a nearby neutron star, which sinks down into the giant's core, researchers said. TZOs look like ordinary red supergiants, like the famed star Betelgeuse in the constellation Orion, but differ in their chemical fingerprints, the theory goes. [Top 10 Star Mysteries]

"Studying these objects is exciting because it represents a completely new model of how stellar interiors can work," study leader Emily Levesque, of the University of Colorado Boulder, said in a statement.

"In these interiors we also have a new way of producing heavy elements in our universe," she added. "You've heard that everything is made of 'star stuff' — inside these stars we might now have a new way to make some of it."

And now Levesque and her team say they have probably found the first TZO — a star called HV 2112 in the Small Magellanic Cloud, a dwarf galaxy that lies about 200,000 light-years away.

The researchers used the 6.5-meter Magellan Clay telescope in Chile to study the light emitted by HV 2112. They found the starlight to be highly enriched in rubidium, lithium and molybdenum, just as theory predicts for TZOs. (Normal red supergiants produce these elements as well, but not in such abundance, scientists said.)

The new data, while suggestive, do not represent a slam-dunk discovery for TZOs quite yet, researchers said.

"We could, of course, be wrong," co-author Philip Massey, of Lowell Observatory in Flagstaff, Arizona, said in a statement.

"There are some minor inconsistencies between some of the details of what we found and what theory predicts," he added. "But the theoretical predictions are quite old, and there have been a lot of improvements in the theory since then. Hopefully our discovery will spur additional work on the theoretical side now."

The find means a lot to Zytkow, who is a co-author of the new study.

"I am extremely happy that observational confirmation of our theoretical prediction has started to emerge," said Zytkow, who is based at the University of Cambridge in England. "Since Kip Thorne and I proposed our models of stars with neutron cores, people were not able to disprove our work. If theory is sound, experimental confirmation shows up sooner or later. So it was a matter of identification of a promising group of stars, getting telescope time and proceeding with the project."

The study has been accepted for publication in the Monthly Notices of the Royal Astronomical Society Letters.