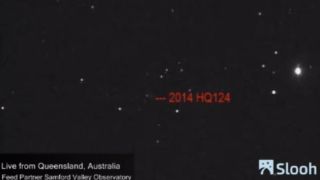 The near-Earth asteroid 2014 HQ124 is seen via telescope from Australia in this June 5, 2014 photo captured by the online Slooh community observatory. The asteroid will fly by Earth, outside the orbit of the moon, on June 8.
(Image: © Slooh Community Observatory)

Humanity should be thankful "The Beast" doesn't have Earth in its crosshairs.

This Sunday (June 8), the near-Earth asteroid 2014 HQ124 — which some observers have nicknamed "The Beast" — will give the planet a relatively close shave, coming within 777,000 miles (1.25 million kilometers) at its closest approach, or about 3.25 times the distance from Earth to the moon.

There is no chance of an impact on this pass, researchers stress. But at 1,100 feet (335 meters) wide, 2014 HQ124 could do some serious damage if it slammed into us. [Potentially Dangerous Asteroids (Images)]

"This one would definitely be catastrophic if it hit the Earth," asteroid impact expert Mark Boslough, of Sandia National Laboratories in New Mexico, said Thursday (June 5) during a webcast produced by the online Slooh community observatory that previewed 2014 HQ124's upcoming flyby.

"If it hit a city, it would definitely wipe out an entire metropolitan area," Boslough added.

If 2014 HQ124 is one solid piece of rock — its composition isn't known for certain — the strike would unleash an explosion with a yield of about 2,000 megatons, Boslough added. For comparison, the atomic bomb the United States dropped on the Japanese city of Hiroshima during World War II packed about 15 kilotons. (One megaton is equivalent to 1,000 kilotons.)

"You'd end up with a crater about 3 miles across," Boslough added. "An event like that would break windows over 100 kilometers away."

Asteroid 2014 HQ124 was discovered on April 23, just six weeks ago — not nearly enough time to deflect the asteroid if it were on a collision course with Earth. But that doesn't mean the asteroid would kill millions of people if it struck New York City or Tokyo.

There would thus probably be plenty of time to organize an effective evacuation campaign if 2014 HQ124 were headed straight for us. But that isn't always always the case, as some (smaller) space rocks slam into the planet without ever being detected.

In February 2013, for example, a 65-foot-wide (20 m) asteroid detonated without warning in the sky above the Russian city of Chelyabinsk, shattering thousands of windows and injuring more than 1,200 people. And there are many more objects out there like the Chelyabinsk asteroid — small space rocks cruising unnamed through the dark depths of space.