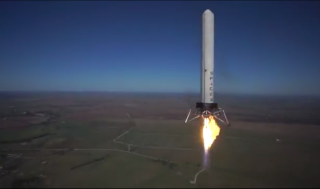 Grasshopper was a reusable vertical-takeoff-and-landing rocket prototype tested by the company Space Exploration Technologies (SpaceX) in preparation for more ambitious launches. After progressively higher hops and pinpoint landings in two years, SpaceX wrapped up the program in 2013 to move resources into the Falcon 9 rocket.

The first stage of several versions of the Falcon 9 rocket have splashed down successfully, and SpaceX is now aiming to land the rocket on an automated barge. Several barge-landing attempts have been made since 2015, but the rocket has not survived any of them yet. SpaceX, however, says that it is getting close to success and that the technology is possible to make the pinpoint landing happen.

Grasshopper was the first stage of SpaceX's Falcon 9, which the company still uses today for the Dragon cargo spacecraft flights to the station. Test flights ran between 2012 and 2013 and were successful, according to SpaceX.

First announced in September 2011, Grasshopper was one piece of SpaceX's desire to make a fully reusable system that will fly cargo and people to and from space. Traditionally, rockets have been considered "throwaway" items, with few exceptions (such as the space shuttle's external solid rocket boosters.)

SpaceX's vision then included fly-back first and second stages on the rocket as well as a spacecraft that can land on land. The Dragon spacecraft currently lands on the water, similar to how the Apollo spacecraft used to do. The human-rated version of the spacecraft will also initially land on water, but later versions are expected to reach solid ground with the stabilizing help of Dragon's SuperDraco engines.

"We will see if this works," SpaceX CEO and founder Elon Musk said when announcing Grasshopper. "And if it does work, it'll be pretty huge."

The first test flight of the rocket took place Sept. 21, 2012, when Grasshopper made a quick six-foot (1.8-meter) jump up and down at SpaceX's test facility in McGregor, Texas. With each subsequent flight, the company then tried to shoot a bit higher or do something different.

Over several test flights in 2013, Grasshopper demonstrated an ability to fight back against wind gusts, as well as to move sideways in the air to its target. It also flew several hundred feet high on a few occasions. The company filmed the rocket flights from the air using autonomous aircraft, providing high-definition views that it uploaded to the Web for sharing.

Among Grasshopper's notable flights was a jump in April 2013 that saw the 10-story vehicle fly 820 feet (250 m) high. In June 2013, Grasshopper leaped 1,066 feet (325 m) and made a near-perfect landing. A subsequent flight test in August included a 100-foot lateral or sideways maneuver before the rocket touched down safely on the ground.

The program capped off Oct. 7, 2013, when the rocket flew 2,441 feet (744 m) into the air, making a flawless takeoff and landing in a flight that lasted about 79 seconds. SpaceX then decided to retire the prototype in favor of using the personnel and money for other programs, notably the Falcon 9 rocket.

On April 18, 2014, SpaceX made a world-first controlled splashdown of the first stage of a Falcon 9, during a Dragon spacecraft resupply run to the International Space Station.

After several water landings, SpaceX tried to make a world-first attempt for a barge landing in January 2015 during a cargo flight to the International Space Station. The first landing made it on target, but the rocket landed hard enough to damage some of the support equipment on the ship, according to Musk.

Another attempt was called off in February 2015 when on landing day, the barge was facing 3-meter waves (almost 10 feet) and also had a malfunction in one of its four thrusters, making it tough to stabilize the ship. SpaceX instead elected for a water landing, which it pulled off successfully.

SpaceX also made hard landings on the ship in rocket flights in April 2015 and January 2016. The first malfunction was partly traced to a problem with the control system, while the second failed because one of the landing legs did not latch. SpaceX did, however, land the rocket's first stage safely on land (near its launch site at the Kennedy Space Center) in a December 2015 flight.

Musk's ultimate goal is to establish a colony on Mars by bringing the cost of spaceflight down as much as he can. Launch costs are considered one of the toughest things to overcome, since it takes a lot of fuel and velocity for a rocket to fight against Earth's gravity to bring items into space.