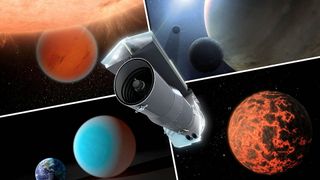 Over its ten year mission, Spitzer expanded its scientific study to include planets in orbit around other stars, offering insights that optical telescopes can't provide. This artist's concept shows Spitzer surrounded by examples of some of the exoplanets Spitzer has studied.
(Image: © Spitzer Science Center)

Based on the findings of an independent review panel, NASA has taken stock of its fleet of orbiting astrophysics telescopes and decided which to save and which to shutter.

Among the winners were the Hubble Space Telescope, the Chandra X-Ray Observatory and the Kepler planet-hunting telescope, which will begin a modified mission designed to compensate for the recent failure of two of its four stabilizing reaction wheels. The infrared Spitzer Space Telescope, however, may be deactivated due to lack of funding. And a bid to convert data collected by the Near-Earth Object Wide-field Infrared Survey Explorer (NEOWISE) into a format usable for astrophysics was also deemed too expensive.

The decisions come at a time when Congress is tightening NASA’s budget, and about half of what astrophysics funding the agency does have goes to the James Webb Space Telescope (JWST), which is being readied for launch in 2018. In 2014, for example, the total astrophysics division funding was about $1.3 billion, of which $658 million went to JWST. Spitzer received $16.5 million this year, and was requesting even less for 2015, but NASA still judged even that amount to be too costly. “To me it’s really sad that this country can’t find just a few million bucks more to throw into this to keep these things active and running as they should be,” says senior review panel chair Ben R. Oppenheimer, an astronomer at the American Museum of Natural History in New York City. [Photos: The Infrared Universe seen by Spitzer]

Recommendations from the main Astrophysics Senior Review Panel (pdf) as well as two separate panels that reviewed the Hubble and Chandra missions came in earlier this spring, and NASA released its response May 16 (pdf). A similar process occurs every two years. In addition to Chandra, Hubble and Kepler, the Fermi Gamma-Ray Space Telescope, the Nuclear Spectroscopic Telescope Array (NuSTAR) and the Swift Gamma-Ray Burst Mission all received extensions through at least 2016, when each is invited to reapply again for another renewal. (NASA, however, turned down the Swift mission’s request for increased funding for special projects and the NuSTAR mission was ordered to lower its operating costs in 2015.) NASA also extended its participation in the European-led X-Ray Multi-Mirror Mission (XMM–Newton) observatory as well as Japan’s Suzaku telescope, and continued funding for analyzing data from NASA's Planck satellite, which was deactivated last year. NASA turned down the Spitzer Space Telescope’s request for an extension, but the team has a chance to resubmit their application with a reduced budget plan. “We are preparing another request, to be guided by what we saw in the senior review,” says George Helou, deputy director of the Spitzer Science Center at the California Institute of Technology.

Spitzer launched in 2003 as a multipurpose observatory targeted at the low-energy infrared wavelengths of light blocked by Earth’s atmosphere. Many objects, such as dim stars and planet-forming debris disks, radiate best in infrared light. Spitzer finished its prime mission in 2009 when it exhausted its supply of liquid helium coolant used to chill the instruments. The loss of the coolant left two of Spitzer’s three instruments unusable, but two of the four wavelength bands on its main camera continued to operate as the Spitzer Warm Mission. “Right now it can take images in a couple wavebands at tremendous sensitivity, but compared to what it used to do, its capabilities are far reduced,” Oppenheimer says. “The committee felt that instead of chopping off a bunch of money from other missions, if we end that one large mission we can save everything else.” Spitzer was already operating at just one third of its prime mission budget, Helou points out, and has been reducing costs every year. Finding further cuts to make without sacrificing too much capability on the observatory will be tough, he says. “But I am an optimist. I think we will find a solution.” [NASA's Ten Greatest Science Missions]

Until JWST comes online, no other telescope can approach Spitzer’s sensitivity in the range of infrared light it sees. The Senior Review report noted that Spitzer had the largest oversubscription of any NASA mission from 2013 to 2014, meaning that it gets about seven times more applications for observing time from scientists than it can accommodate.

Although Spitzer may suffer the most from the latest review, practically every mission will face some budget tightening. Smaller elements of many of the extended missions got the ax as well, such as the majority of the observatories’ “guest observer” programs, which provide money for scientists outside of the primary telescope teams to submit research proposals. “The guest observing programs were very powerful because you get people from all over the world proposing ideas that maybe the people on the team wouldn’t have come up with,” Oppenheimer says. “But it’s got to be paid for.”

A plan to augment the NEOWISE mission, which hunts for near-Earth asteroids that might pose a collision risk to our planet and is funded through NASA’s Planetary Science Division, also took a hit.* A team of astrophysicists put in a three-year proposal called MaxWISE to convert the data it is already taking into a format that would allow other researchers to use it as well—such as for studies of unseen tiny planets called brown dwarfs. “It’s a really cool proposal, and it’s not a lot of money,” says Oppenheimer, whose review panel recommended that the project be supported. “Unfortunately, it’s not going to happen.”

At least some missions received welcome news: Kepler has been hibernating while scientists investigated how the telescope could continue to operate without two of its four reaction wheels, which help it to point at precise targets on the sky. Researchers devised a way to compensate for the failure by pointing in the ecliptic — the plane of Earth’s orbit — where radiation pressure from the sun can help balance the spacecraft. “It’s a really clever thing these guys did to keep that satellite pointed accurately enough to do some really remarkable science,” Oppenheimer says. Kepler Deputy Project Manager Charlie Sobeck, a scientist at NASA Ames Research Center, released a statement May 16 celebrating the decision to approve the new mission, called K2. “The approval provides two years of funding for the K2 mission to continue exoplanet discovery, and introduces new scientific observation opportunities to observe notable star clusters, young and old stars, active galaxies and supernovae.”

*Correction (05/27/14): An earlier version of this story stated that the NEOWISE mission took a funding hit. In fact, the primary NEOWISE mission was unaffected, but a plan called MaxWISE to augment the mission by converting its data into usable form for astrophysics took the hit.

This story was provided by Scientific American.