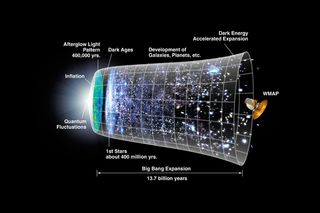 A majority of adults in the United States are not convinced that the universe began with the Big Bang, according to a new Associated Press-GfK poll.

"Science ignorance is pervasive in our society, and these attitudes are reinforced when some of our leaders are openly antagonistic to established facts," 2013 Nobel Prize in medicine winner Randy Schekman of the University of California, Berkeley told the AP. You can read the full story behind the poll and look at the survey itself directly via the Associated Press: http://ap-gfkpoll.com/featured/findings-from-our-latest-poll-2

The AP-GfK survey rated the confidence individual respondents had in statements about medicine and science. Only four percent of responders do not think that smoking leads to cancer and 15 percent were unsure about the safety and effectiveness of childhood vaccines, the AP reported.