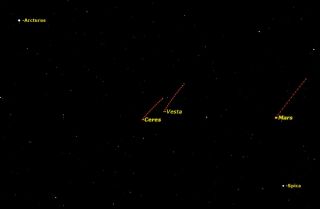 Two of the three largest asteroids, Ceres and Vesta, are in opposition to the Sun this week, along with the planet Mars. This chart shows their positions on the night of April 9, and their daily positions over the next two weeks.
(Image: © Starry Night software)

This week most skywatchers will have their eyes on the planet Mars, which reached opposition with the sun on April 8, but will be unaware that two other important solar system bodies also came into opposition the next week.

All three asteroids, along with a fourth, Juno, were discovered in a remarkable seven-year period beginning on the first day of the 19th century, Jan. 1, 1801.

Ceres is the largest asteroid, and was recently reclassified by the International Astronomical Union as a "dwarf planet." At 596 miles (959 kilometers) in diameter, it is nearly twice the size of the next largest asteroids, Pallas (326 miles, or 524 km) and Vesta (318 miles, or 512 km). By way of comparison, Earth's moon is 2,159 miles (3,475 km) in diameter. If all of the asteroids, more than a million of them, were grouped together, they would have only 4 percent of the mass of our moon. [Photos: Asteroid Vesta and NASA's Dawn Spacecraft]

Although Vesta is about half the size of Ceres, it appears brighter in our sky, because its surface is whiter than that of Ceres, reflecting a lot more of the sun's light. At its brightest, Vesta is just barely visible with the naked eye, but is much more easily spotted with binoculars. At the beginning of April it was magnitude 5.8. Ceres was only magnitude 7.0, and so binoculars will be essential. Both will appear as star-like points of light; that'swhy they are called "asteroids."

At the beginning of April, both asteroids were located almost halfway between the first magnitude stars Arcturus and Spica. These stars can be spotted using the arc of the handle of the Big Dipper. Follow the arc away from the Dipper's bowl, "arc to Arcturus and speed on to Spica."

As you can see in the chart, Ceres and Vesta move from left to right, just like Mars, when close to opposition. At this point in their orbits, all three are in "retrograde motion," an apparent reversal of their normal right to left motion, caused by the Earth's faster motion. Because Vesta is twice as far away (1.230 AU) as Mars (0.618 AU), it appears to move more slowly. (One astronomical unit, or AU, is the average distance between the Earth and the sun, about 93 million miles, or 150 million kilometers.)

Ceres is nearly three times farther than Mars, at 1.644 AU, and moves even more slowly.

Because an asteroid looks just like a star, the only way to be sure you're looking at the right thing is to make a sketch of the star field on two different nights. The "star" that moves will be the asteroid.

This article was provided to SPACE.com by Simulation Curriculum, the leader in space science curriculum solutions and the makers of Starry Nightand SkySafari. Follow Starry Night on Twitter @StarryNightEdu. Follow us @Spacedotcom, Facebookand Google+. Original article on Space.com.