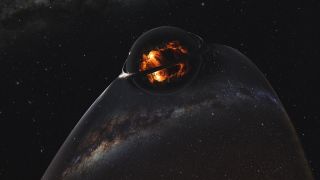 The next episode of "Cosmos" Sunday night (April 6) will delve into the mysteries of light and how it travels through space.

The actor Alfred Molina ("Raiders of the Lost Ark") will play Ibn al-Haytham, a physicist that developed the scientific method and first understood the way the eye works during the fifth episode of "Cosmos: A Spacetime Odyssey" — a Fox reboot of famed astronomer Carl Sagan's beloved science TV miniseries. The show titled "Hiding in the Light" will air Sunday at 9 p.m. ET/PT.

"This is the method of science, so powerful that it has carried our robotic emissaries to the edge of the solar system and beyond," "Cosmos" host and astrophysicist Neil deGrasse Tyson says in a preview. "It has doubled our lifespan, made the lost worlds of the past come alive. Science has enabled us to predict events in the distant future, and to communicate with each other at the speed of light as I am with you right at this moment." [Watch a "Cosmos" Preview for "Hiding in the Light"]

Last week's episode focused on the life of William Herschel, an astronomer who learned that looking up into the sky is tantamount to peering into the past. He will also make an appearance in Sunday's episode as the scientist who discovered infrared light. We'll be looking out for Caroline Herschel, William's sister, who helped him with his astronomy and - as the first woman ever to discovery a comet - was a noted astronomer in her own right.

The "Cosmos" reboot has not yet focused on a female scientist, however, that could change with the newest episode.

The new episode will also follow Tyson as he travels to Isaac Newton's childhood home and a secret laboratory in 19th century Bavaria. Tyson also tells the story of the Chinese philosopher Mo Tzu and his 2,000-year-old film.

The 13-part series, "Cosmos: A Spacetime Odyssey" is written by Steven Soter and Ann Druyan, Sagan's widow who worked with him on the original "Cosmos." Tyson also has a personal connection to Carl Sagan. While applying to college, Tyson once visited Sagan at his laboratory at Cornell University, where the famed astronomer showed him kindness and gave him a signed copy of one of his books.

"Cosmos: A Spacetime Odyssey" airs Sunday at 9 p.m. ET/PT on Fox. It will be rebroadcast with extra material on the National Geographic Channel on Monday (March 31) at 10 p.m. ET/PT. Check local listings. To catch up on "Cosmos" you can watch the four previously aired episodes for free via Hulu.