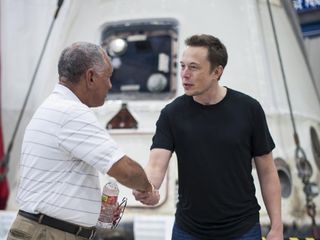 NASA administrator Charles Bolden (left) congratulates SpaceX CEO and chief designer Elon Musk on June 13, 2012. Behind them is the Dragon capsule that on May 25 became the first private vehicle ever to dock with the International Space Station.
(Image: © NASA/Bill Ingalls)

"That was definitely the worst year of my life," SpaceX and Tesla Motors CEO Elon Musk tells 60 Minutes correspondent Scott Pelley in an interview that aired Sunday (March 30).

Musk was talking about 2008. His Falcon 1 rocket was 0-3, having failed again that August. And Tesla, which hit a speed bump with its early model Roadster, "was hemorrhaging money," in Pelley's words.

The $180 million Musk made from selling PayPal to eBay in 2002 was essentially gone, having "bet it all" — as Pelley put it — on SpaceX and Tesla. [6 Fun Facts About Private Rocket Company SpaceX]

"What was that year like for you?" the 60 Minutes correspondent asks Musk right around the interview's seven-minute mark.

"And [I was] getting divorced by the way, to add to that," Musk replies. "That was definitely the worst year of my life."

"To save Tesla, Musk needed millions from investors. His fortune was gone," Pelley intones in the voiceover.

Musk picks it up from there.

"I remember waking up the Sunday before Christmas in 2008 and thinking to myself, 'man, I never thought I was someone who could ever be capable of a nervous breakdown,'" he says. "I felt this is the closest I've ever come. Because it seemed pretty, pretty dark."

About three months earlier, on Sept. 28, 2008, SpaceX's Falcon 1 rocket lifted off for the fourth time, successfully delivering a dummy payload to orbit.

"We were running on fumes at that point," Musk says. "We had virtually no money... a fourth failure would have been absolutely game over. Done."

Even with a successful launch finally under his belt, Musk apparently found himself contemplating financial ruin on that Sunday before Christmas six years ago.

On Dec. 23, 2008, NASA awarded SpaceX a $1.6 billion contract to haul at least 20 metric tons of cargo to the international space station over 12 planned flights.

"NASA called and told us we won a $1.5 billion contract," Musk says in the interview. "I couldn't even hold the phone. I just blurted out, 'I love you guys!'"

"They saved you," Pelley suggests.

"So you were saved in a period of three days by two completely unexpected events. Merry Christmas."

"The rockets haven't failed since. His cargo capsule has docked three times with the space station and in the California plant they are fitting seats for what they hope will be eventual manned missions," Pelley narrates.