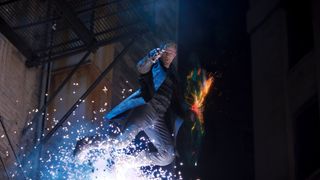 A new trailer for the movie "Jupiter Ascending" reveals an incredible space age science fiction universe. The trailer features crazy looking spacecraft, beautiful shots of Jupiter and a destroyed world with rings of debris orbiting it.

"Jupiter Ascending" — written and directed by Andy and Lana Wachowski — follows the life of Jupiter Jones (played by Mila Kunis) as she discovers her role in the cosmos. Jupiter is actually cosmic royalty and the next in line for a celestial inheritance, but on Earth, she is a toilet cleaner without much luck. "Your Earth is a very small part of a very large industry," one of the characters told Jupiter in the trailer. Watch the trailer in the window below. "Jupiter Ascending" is set for release in July. [8 Science Fiction Movies to Watch in 2014]