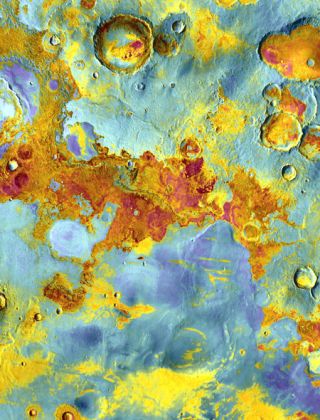 PASADENA, California - Scientists now have the ability to contrast day/night Mars imagery to bring to light the red planet as never before.

NASA's Mars Odyssey spacecraft has been orbiting that distant planet since October 2001. Among a set of onboard instruments is the Thermal Emission Imaging System--or THEMIS for short. This special multi-wavelength camera has 5 visual bands and 10 infrared bands. Its main tasks are mapping rock makeup and detecting heat, which yields information on the physical and thermal properties of the martian surface.

After years of flying above Mars, Odyssey's THEMIS is providing researchers a daytime/nighttime look at that globe--with surprises likely in the offing.

This ability could well lead to spotting hot spots--Yellowstone-like locales on Mars. Toss in a splash of subsurface water and you may have cozy cubbyholes for microbial life.

It has taken year after year of whipping around the planet to build up enough imagery, but now Odyssey data can be turned into specialized mosaics.

"We're taking the daytime infrared and the nighttime infrared and the daytime visible data ... and merging them all together to make well-calibrated and beautiful imagery," said Philip Christensen at Arizona State University (ASU) in Tempe, a leading Mars researcher. He is Principal Investigator for the 2001 Mars Odyssey's THEMIS instrument, developed by ASU in collaboration with Raytheon Santa Barbara Remote Sensing.

In some ways, THEMIS is a fortune telling instrument.

That is, the instrument's data can be utilized to better select appropriate exploration spots for future landers, Christensen said. When melded with other datasets--such as high-resolution visible images, elevation and other information--scientists have a wealth of facts ahead of time to pick both scientifically rewarding and safe landing sites for missions.

Odyssey is already supporting site selection for NASA's Phoenix Scout--a stationary but well-armed lander--to be launched next year, using data showing that surface areas near the poles of Mars consist of more than 50 percent water ice by volume.

Christensen has volunteered to crank out mosaics of potential areas in which NASA's next rover, the Mars Science Laboratory (MSL), might be targeted. He made the offer here earlier this month at an MSL landing site workshop.

"The THEMIS data has a lot to contribute in picking MSL sites ... to understand the geology. We can help the science community interpret some of those sites," Christensen said.

Christensen said that work is underway to build up a global mosaic, "but that's a massive effort," he told SPACE.com. Thanks to new software tools and team fortitude, however, landing site regions can be turned around in a few days time, he said.

Looking at what has now been amassed, observations of Mars after dark reveal a rocky world, said Christensen said. Bedrock, outcrops, rocky slopes are showing up.

"Mars is not a dust-covered place everywhere...it's not a sand-covered place," Christensen noted. "It really has rocky materials. There's a lot of variability. And I'm surprised by that given the importance of dust and wind on Mars."

Peel the onion back

Christensen and his colleagues are delving into some 2,000 THEMIS image pairs that are taken a year apart. Obviously, the rocks would not have changed.

"But if there is a thermal difference, maybe there is some local hot spot or near surface water that's evaporating," Christensen said. He admitted that at first he thought a search for hot spots would be simple. That's turned out not to be the case.

"I don't rule out that there are hot spots ... nor near surface water. It's just taking forever to peel the onion back," Christensen said, taking out the atmosphere and the signature of rocks to distinguish hot spots or subsurface water. "We're just to the point where we can start to do that."

While software can help tease out and flag things in THEMIS imagery, Christensen added, the brain is very well-suited for pattern recognition. "So we're trying to do the 21st century approach, but the brain is such a good comparator," he observed.

Christensen said that he's prepared to be surprised regarding what may pop out of the imagery analysis. "I would be very disappointed if we don't have a eureka moment. I think something is going to show up," he stated.

That change could manifest itself in various ways. It might be ground ice or evaporative water, an impact crater, a landslide or the wind blowing dust off the surface.

"Mars is too dynamic for us not to see changes," Christensen explained.

Assuredly, seeing Mars in a new light--a planet that once was, or is now a habitat for life--remains a top quest in exploring that time-aged world.

By coalescing multiple data sets from the armada of orbiters now circling Mars, isolating where best the chances for life, past or present, is clearly in the cards.

This task is presently handicapped by an inability to make a spacecraft clean enough to go to, say, Mars gullies. Those features may well be formed by water.

"It is frustrating," Christensen said. "I'd love nothing more than go to a gully site ... or one of the ice sites ... and drill down a couple of meters and see what bugs are living in the snow. But given the reality of planetary protection, that's not in the cards," he said.

While the $1.5 billion Mars Science Laboratory effort has instruments that could study gullies and ice-covered regions on Mars, Rummel told SPACE.com that "the project has not chosen to make the spacecraft clean enough to go there ... this time." Nonetheless, he added, future missions using MSL's same landing system and rover could be cleaned well enough to go anywhere on Mars.

"We're better off going to a place where we think life on Mars was a 100 million years ago," Christensen pointed out. "It's gone now, but I can study the rock ... I can look for the evidence of that life in the rock. From where we are with planetary protection, that's our best shot," he suggested.

In Christensen's opinion, he would be very surprised if there's life on Mars today. If it is there, some definitive signature of that biology would have already been seen, he said.

On the other hand, Christensen wouldn't rule out finding little microbes living in, or perhaps alive but dormant, in near-surface ice deposits. "I wouldn't be shocked by that. That's certainly within the realm of possibility."