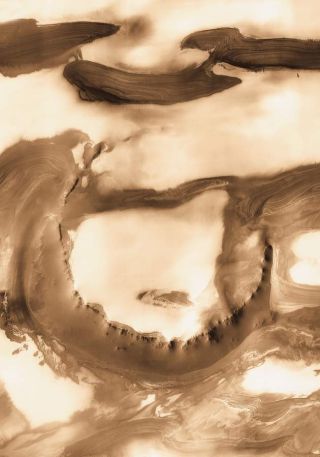 Near one edge of Mars' northern polar cap stands Udzha. Named for a town in Siberia, Udzha, which is 45 km (28 mi) across, is classified as a crater. Yet it's almost hidden from view as its sharp-edged, rocky rim peeks from under the polar cap's layers.
(Image: © NASA/JPL/Arizona State University)

Editor's Note: This article was originally presented by the Mars Odyssey's Thermal Emission Imaging System (THEMIS) team at Arizona State University. It is reproduced here with permission. At the THEMIS site, you can zoom in on this new image.

The northern polar cap of Mars sprawls across the top of the Red Planet for roughly 1,000 kilometers (620 miles). At thickest, the cap piles up about 2.7 km (9,000 feet) high, but becomes thinner toward its serrated edges, where deep canyons and smaller troughs carve a spiraling pattern into the cap.

Near one edge of the northern polar cap stands a curious feature named Udzha. Named for a town in Siberia, Udzha, which is 45 km (28 mi) across, is classified as a crater. Yet it's almost hidden from view as its sharp-edged, rocky rim peeks from under the polar cap's layers.

The polar caps of Mars, which are large enough to be glimpsed even in backyard telescopes from Earth, form an archive of the planet's recent climate history. The record is written in layer after layer of dust and ice.

Each polar winter sees an accumulation of carbon-dioxide frost, which falls as light snow, condensing directly from the atmosphere as temperatures plunge to minus 130 degrees Celsius (minus 202 Fahrenheit). This produces a thin "polar cap" that reaches down to about latitude 60 degrees north. This layer resembles the layer of snow cover that collects in Earth's northern hemisphere every winter.

On Mars, the frost condenses around dust particles brought by the winds from all over the planet. When the frost disappears the following summer, it leaves the dust behind, along with the residual polar cap, which is made of water ice.

As years pass, the dusty layers slowly accumulate, while major climatic events interrupt the sequence from time to time. These events-still poorly understood by scientists-prevent the layered deposits from displaying a monotonous regularity.

Besides its annual cycle of frost deposition, the Martian polar caps undergo cycles on longer time scales. The planet's spin axis changes its tilt relative its orbit over periods of a few million years. On scales of 100,000 years or so, the axis experiences lesser tilts.

Finally, the planet's orbit itself undergoes changes on similar time scales that alter the severity of the seasons. Each of these longer-than-annual cycles imparts a signature on the polar materials. It's as if a stack of buckwheat pancakes has a few buttermilk ones inserted here and there.

In the dark troughs that flank Udzha lies a complex history of the Martian climate-if only scientists could read it clearly! Recent work has focused on mathematical analysis of the patterns found in the exposed layers.

The goal, only partly accomplished, is to identify the broad patterns of change and match them to the calculated changes in Mars' orbit and spin axis.

If Udzha is a rocky bowl brimful with deposits of ice and dust, its southern flank appears startlingly smooth and featureless. This material reaches from the rim down to a broad trough at the slope's foot, about 600 meters (2,000 feet) below the rim in elevation. What's covering the slope? Where did its layers go?

THEMIS images taken late at night show the slope is warmer than the rest of Udzha and the dark layers, with the rocky rim being warmest of all. This is reasonable, given that the slope faces south and southwest-toward the Sun, in other words. As the scenic vista shows, most of the landscape is extremely flat-and much of it is highly reflecting white ice. So wherever local slopes tip to face the Sun more squarely, they grow warmer.

It's possible the slope lacks the layering seen everywhere because it is made of debris that worked free of the layered sediments and was blown by the wind. The slope might also include rocky material that weathered out of the rim-rock and trickled down.

Reduced to countless individual pieces, the material has slid, mingled, merged, and collapsed into a relatively homogenous mass. It might even be dry and loose. But a more likely bet says it's relatively firm, held fast by water that has worked its way into the material and froze.