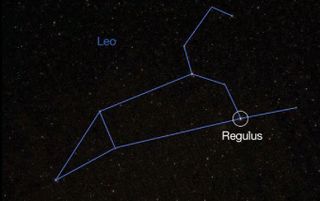 This image from a NASA March night sky video shows the constellation Leo, the Lion, and position of the bright star Regulus.
(Image: © NASA/JPL)

The term, "March comes in like a lion," not only pertains to weather, but to astronomy as well. As darkness falls these brisk March evenings, we can see a noble star pattern emerging into view in the eastern night sky: The great celestial lion Leo, king of the beasts, accompanied by its brightest star, Regulus, marking the lion's heart.

Regulus stands at the lower end of the handle of a very distinctly marked and striking sickle-shaped figure, which resembles a large reversed question-mark which outlines the majestic head, breast and mane of the imaginary lion. Many people hail the appearance of the Sickle of the Leo as one of the first signs of spring.

The easiest way to positively identify the Sickle is to locate the bowl of the Big Dipper. The two outer stars of the bowl are the famous "pointer" stars that directs us toward Polaris, the North Star. The two inner stars of the bowl when directed in the opposite direction — toward the south — ultimately will take you to the Sickle. At New York’s Hayden Planetarium, I often tell my audience to imagine that the bowl of the Dipper is filled to the brim with water. "Now," (using my laser pointer on the planetarium dome), "let's imagine we've just poked a hole in the bottom of the bowl. Where does that water go?" [Constellation Quiz: Can You Read the Stars?]

Following that imaginary flow of water ultimately will bring us to the constellation Leo.

Eastward from the Sickle there is a right triangle of stars which also belongs to Leo. Two of these stars mark the hindquarters, while at the eastern point of this triangle you will find another bright star whose name is Denebola, the "tail" of the Lion.

Nemean Lion and House of the Sun

Leo is among the most ancient of the constellations and is often thought to be representative of the rampaging Nemean Lion, which was the largest and fiercest lion in the world. It had such a thick and tough skin that no arrow could penetrate it. The first of the 12 labors of Hercules was to somehow kill this seemingly invincible beast. Hercules chose to grasp the lion by the throat and after a terrific struggle ultimately strangled the lion to death. He then wore the lion's skin as a cloak for his own defense in his other exploits.

The Lion was placed in the sky by the Egyptians to represent the fierce heat of the sun in midsummer. To them, Leo was the House of the Sun. Some 5,000 years ago, when the course followed by the sun among the stars was first charted with remarkable accuracy by ancient stargazers, it was found that in Leo were the stars among which the sun was to be found at the summer solstice. They thus coincided with the heat of summer, when the sun was at its strongest. So both Leo and the Dog Star (Sirius) were believed to contribute to the heat and storms of summer.

Regulus is about 79 light-years from Earth, has an actual luminosity of about 160 times that of the sun and has an estimated diameter of about five times that of our home star.

Because the ecliptic — which marks the path of the sun against the star background in the night sky — passes just a half degree south of Regulus, the sun almost runs directly over Regulus each year on Aug. 23 on the way south to its crossing of the equator at the beginning of autumn. The moon also passes close beside Regulus every month, sometimes even hiding (occulting) it from view. Thus, Regulus serves as a landmark of sorts in the sky. [March Night Sky: See Stars, Planets and More (Video)]

In addition, Regulus is not only one of the 21 brightest stars in the sky, but it possesses much practical importance as one of the principal stars having been used by sailors ever since the beginning of navigation to determine their place at sea.

From the remotest times it has been known as the "royal star" par excellence; one of the four royal stars regarded by the ancient Persian monarchy which were supposed long ago to rule over the four quarters of the heavens.  In Babylon they knew it as Sharru, the King, in India as Maghā, the Mighty, in Persia as Miyan, the Center and in Latin Rex, from which Copernicus constructed the name we use today: Regulus, The Little King.

The three other seasonal "royal stars" are Antares (summer), Fomalhaut (autumn) and Aldebaran (winter). But the royal star of spring, Regulus, has always been in a certain way, their chief. For about 5,000 years it has been believed, traditionally, to control the affairs of heaven, and the astrologers have seized upon this idea by making it the natal star of kings, and those destined to kingly achievements and rule.

On Thursday, March 20, Regulus will participate in a rare celestial event when an asteroid passes directly in front of the star, as seen from Earth. The asteroid in question is 163 Erigone. Asteroid 163 Erigone  is about 45 miles (72 km) wide, but its "shadow" slanting to Earth's surface will be 67 miles (108 km) wide.

Erigone's shadow will move on a southeast-to-northwest trajectory and will extend from New York City as well as western and central Long Island to Oswego in New York State, and then continues northwest, the length of Ontario to the Hudson Bay shore of Manitoba. Those who are within the shadow path and watching at just the right moment with just their eyes will see an amazing sight: Regulus will seem to abruptly disappear as if a switch had been thrown, blotted out by the tiny invisible asteroid.

Regulus will remain invisible for up to 14 seconds (for those situated along the center of the path); an incredible, albeit very brief occurrence.

Space.com will have more details as we get closer to this very special event, so stay tuned!

Editor's note:If you snap a great photo of the star Regulus, the constellation Leo or any other night sky view, and would like to share it with Space.com for a story or gallery please send comments and images to managing editor Tariq Malik at: spacephotos@space.com.

Joe Rao serves as an instructor and guest lecturer at New York's Hayden Planetarium. He writes about astronomy for Natural History magazine, the Farmer's Almanac and other publications, and he is also an on-camera meteorologist for News 12 Westchester, N.Y. Follow Space.com @Spacedotcom. We're also on Facebook and Google+. Original article on Space.com.