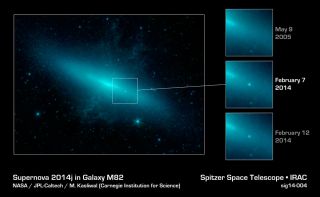 The closest supernova of its kind to be observed in the last few decades has sparked a global observing campaign involving legions of instruments on the ground and in space, including NASA's Spitzer Space Telescope. Image released Feb. 26, 2014.
(Image: © NASA/JPL-Caltech)

A NASA space telescope captured an amazing view of a new supernova, seeing the star explosion through the cosmic smoke of the relatively nearby Cigar Galaxy.

The supernova, called SN 2014J, first came into view for human observers on January 21, 2014. The stellar explosion represents the closest supernova of its kind seen in the last few decades. It spurred a global observing campaign involving many instruments, both ground-based and orbiting, including NASA's Spitzer Space Telescope.

Spitzer possesses a distinct advantage in observing this supernova, however. Dust floating in SN 2014J host galaxy M82, also known as the "Cigar Galaxy," partially obscures observations in optical and high-energy forms of light. Since Spitzer sees in infrared light, which penetrates the dust, the space telescope can look directly at the aftermath of the stellar explosion. Supernovas occur when a star's material collapses into itself, causing a massive explosion.

The three inset images show how the supernova blossomed, seemingly from nowhere, through Spitzer's view of M82 on three separate dates: May 9, 2005, Feb. 7, 2014 and Feb.12, 2014. The observations from this year reveal a bright spot — the supernova — not present in the prior observations. By Feb. 12, however, the supernova started to dim. Its brightness peaked during the first week of February.

SN 2014J glows very brightly in the infrared light seen by Spitzer. The telescope observed the supernova before and after it reached its peak brightness. Scientists have only obtained early observations with an infrared telescope for a few supernovas like SN 2014j. The stellar explosion is known as a Type Ia supernova, which are regarded as "standard candles" used to measure distances in the universe. Analysis of the newly collected data could help scientists learn more about how these explosions occur.

In the image, light from Spitzer's infrared channels appears blue at 3.6 microns and green at 4.5 microns.