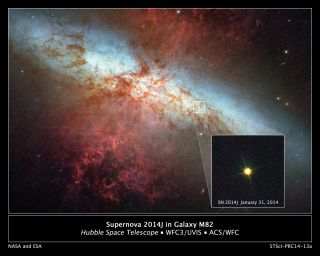 On Jan. 21, astronomers spotted the closest supernova in recent decades flash to life in the galaxy M82, some 11.5 million light-years from Earth. The supernova, designated SN 2014J, suddenly became a superstar as it became so bright that amateur astronomers with modest telescopes could easily pick out the stellar explosion in the night sky. Now, Hubble has slewed in the direction of M82 to snap this dreamy portrait of the historic stellar event.

SN 2014J is known as a Type 1a supernova, a very special kind of supernova. It is thought a Type 1a supernova is triggered by a white dwarf — an ancient small star that is the stellar husk of a star of approximately the same mass as our sun — accumulating material from a binary partner star. When the accumulated mass reaches a certain threshold, the bloated white dwarf ignites a supernova. As the threshold of material is very specific, which generates a very specific quantity of energy, Type 1a supernovae are used by astronomers as “standard candles” to measure the scale of the Universe. If you know the amount of energy released by this supernova, no matter where it is in the Cosmos, you can precisely measure your distance from it.

In the case of SN 2014J, the closest Type 1a supernova since SN 1972e, this is the perfect opportunity to further understand the mechanisms behind a phenomena that underpins our ability to understand the scale, age and expansion of the Universe. In 1998, astronomers made the groundbreaking discovery that a mysterious force was acting on the expansion of the Universe, dubbed “dark energy,” and Type 1a supernovae were at the root of this revelation.

In this new observation captured by Hubble’s Wide Field Camera 3, the supernova has been superimposed over a photo mosaic of the entire M82 galaxy in 2006 taken with Hubble’s Advanced Camera for Surveys. This supernova portrait was acquired on Jan. 31, just as the explosion was reaching its peak in brightness.

As Hubble is sensitive to ultraviolet wavelengths of light, the impact of the supernova on the surrounding interstellar environment can be studied, building on our knowledge of these important stellar events and how they can impact their host galaxies.