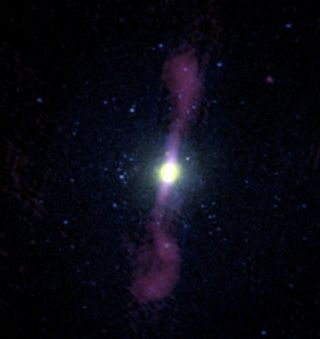 This image shows a composite view of the giant elliptical galaxy NGC 1399. The stellar component, as observed at optical wavelengths, is shown in white at the center of the image. The galaxy is embedded in a hot atmosphere of ionized hydrogen gas, which is shown in blue. With temperatures up to tens of millions of K, the hot gas shines brightly in X-rays and was observed using NASA's Chandra X-ray Observatory.
(Image: © Digitised Sky Survey/NASA Chandra/Very Large Array (Robert Dunn et al. 2010))

Supermassive black holes could be quenching star formation in elliptical galaxies, forcing them to appear "red and dead," a new study reports.

But new observations suggest that a rethink is in order. Some big ellipticals do indeed harbor large amounts of cold gas — but these reservoirs likely get heated up or driven off by powerful jets of material blasted out by supermassive black holes, which lurk at the heart of most if not all galaxies. [The Strangest Black Holes in Space]

"These galaxies are red, but with the giant black holes pumping in their hearts, they are definitely not dead," study lead author Norbert Werner, of Stanford University, said in a statement.

Werner and his colleagues studied eight giant elliptical galaxies using the European Space Agency's Herschel Space Observatory. They found that six of the eight have lots of cold gas, which Herschel detected as far-infrared emissions from carbon ions and oxygen atoms.

The team then investigated the galaxies' stockpiles of hotter gas, looking at optical images as well as X-ray data gathered by NASA's Chandra X-ray Observatory.

"The contrasting behavior of these galaxies may have a common explanation: the central supermassive black hole," said co-author Raymond Oonk of ASTRON, the Netherlands Institute for Radio Astronomy.

The two ellipticals without cold gas have incredibly active central black holes at their cores, which are accreting material at a breakneck pace and launching energetic jets out into space, researchers said. These jets could be reheating the cold gas or clearing it away from the galaxies altogether.

This process may explain why star formation has halted in all eight elliptical galaxies, study team members said.

"Once again, Herschel has detected something that was never seen before: significant amounts of cold gas in nearby red-and-dead galaxies," said Göran Pilbratt, Herschel project scientist at ESA. "Nevertheless, these galaxies do not form stars, and the culprit seems to be the black hole."