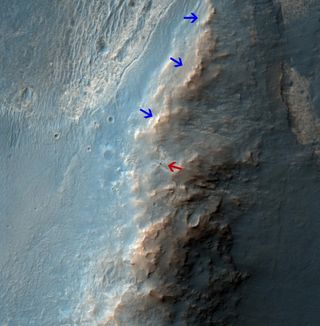 This image was taken with the High Resolution Imaging Science Experiment (HiRISE) camera on NASA's Mars Reconnaissance Orbiter on Feb. 14, 2014. The red arrow points to the Mars rover Opportunity, while the blue arrows highlight the tracks left by the rover since it entered the area in October 2013.
(Image: © NASA/JPL-Caltech/Univ. of Arizona )

New photos of the Martian landscape further rule out a meteorite impact as the culprit behind the "jelly doughnut" rock that mysteriously appeared in front of one of NASA's Mars rovers last month.

NASA's Mars Reconnaissance Orbiter snapped pictures as it flew above the Opportunity rover on Feb. 14, and this week, the space agency released a photo from that flyover campaign. In a view that covers a patch about 0.25 miles (0.4 kilometers) wide, Opportunity looks like a speck and some of the rover's faint tracks are visible, but there are no new impact craters in sight, NASA officials say.

A fresh meteorite scar might have explained how a rock got tossed in front of Opportunity last month. The rock was dubbed "Pinnacle Island," and Steve Squyres, the rover's lead scientist at Cornell University, had noted its resemblance to a jelly doughnut. The strange feature materialized in Opportunity's field of view on Jan. 8, and it was absent in pictures of the same place just days before.

NASA scientists had already concluded that the rock was most likely kicked up by one of Opportunity's wheels. Using further observations from the rover, researchers said they could trace where the rock had been struck, cracked and moved.

But that conclusion hasn't stopped fringe theories from cropping up. One person has even filed a lawsuit against the space agency, alleging that NASA has failed to properly investigate what is likely a mushroom-like fungus growing on the Red Planet.

Opportunity, which recently celebrated its 10th anniversary on Mars, is now exploring Murray Ridge, a spot on the western wall of Endeavour Crater, which spans about 14 miles (22 km) in diameter. With the Pinnacle Island enigma behind it, Opportunity is being steered uphill to check out exposed rock layers on the slope of the ridge.