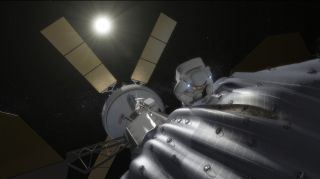 This concept image shows an astronaut preparing to take samples from the captured asteroid after it has been relocated to a stable orbit in the Earth-moon system. Hundreds of rings are affixed to the asteroid capture bag, helping the astronaut carefully navigate the surface. Image released Aug. 22, 2013.
(Image: © NASA)

NASA has set up a "rapid response system" to pick the best candidates for its ambitious asteroid-capture mission.

The space agency aims to use a robotic spacecraft to haul a near-Earth asteroid into a stable lunar orbit, where astronauts would visit it in the future. It's not as easy as just picking a space rock and going, however. Many asteroids are too big to be moved easily or are in unstable orbits. Others are too distant for telescopes to figure out what they're made of, which could make them unsuitable candidates.

"There are other elements involved, but if size were the only factor, we'd be looking for an asteroid smaller than about 40 feet (12 meters) across," Paul Chodas, a senior scientist in the Near-Earth Object Program Office at NASA's Jet Propulsion Laboratory (JPL) in California, said in a a statement. [NASA's Asteroid-Capture Mission in Pictures]

"There are hundreds of millions of objects out there in this size range, but they are small and don't reflect a lot of sunlight, so they can be hard to spot," Chodas added. "The best time to discover them is when they are brightest, when they are close to Earth."

Asteroids hit the headlines in a big way a year ago, when a space rock broke up over Chelyabinsk, Russia, injuring 1,500 people. Since the Russian meteor explosion, space agencies worldwide have stepped up the search for space rocks that are potentially hazardous to Earth.

NASA is billing the asteroid-capture mission as one step in that process, arguing that the effort could help test out processes to move a threatening rock out of its Earth-crossing orbit.

To ferret out the best candidates, NASA has a relatively new screening process in place that plumbs a database of "small bodies" discovered near Earth. Asteroids are typically found by astronomers, who then pass on the information to the Minor Planet Center in Cambridge, Mass. Researchers at JPL use this database to update their own information.

"If an asteroid looks as if it could meet the criteria of size and orbit, our automated system sends us an email with the subject 'New ARM Candidate,' " Chodas said. "When that happens, and it has happened several dozen times since we implemented the system in March of 2013, I know we'll have a busy day."

NASA needs to move quickly when one of these candidates is found, because newly spotted near-Earth objects are usually visible in telescopes for just a few days before they move out of range. If the telescopes are available, NASA uses two massive radar observatories — the Deep Space Network station at Goldstone, Calif., and the Arecibo Observatory in Puerto Rico — to get more details on size and rotation.

Sometimes, other observatories are used to chart the asteroid's path in space. The NASA-funded Infrared Telescope Facility in Mauna Kea, Hawaii, if it's available, can provide information on the asteroid's composition. Another potential helper is NASA's reactivated NEOWISE spacecraft, whose new mission is to track asteroids that pass close to Earth.

While only about two potential candidates are discovered every year through this process, NASA estimates it could increase this to at least four if several more "imaging assets" come online as expected, such as an upgrade to the NASA-funded Catalina Sky Survey in Arizona.

The agency currently spends $20 million annually seeking dangerous space rocks in its Near Earth Observation Program. NASA's 2014 budget request has $105 million for the asteroid capture and redirection project, some of which will go toward seeking partnerships for the venture.