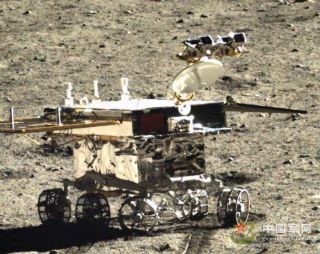 Yutu moon rover may not have endured its encounter with low lunar temperatures.
(Image: © Chinese Academy of Sciences)

China's first moon lander, Chang'e 3, is reportedly up and running following its second encounter with the vicious lunar night cycle. But whether the lander's sidekick, the Yutu moon rover, also survived the lunar cold is not immediately clear.

Meanwhile, the mobile Yutu rover — meaning "Jade Rabbit" — may well have frozen to death. China's space agency has yet to release an official status update on the rover. The state-run China Daily newspaper reported that, as of Monday, the rover "could not be restored to full function" and that fans of the mission were mourning the development on Weibo, China's Twitter equivalent. [See photos from China's Chang'e 3 moon mission]

Chang'e 3 landed on the moon's Mare Imbrium (Sea of Rains) on Dec. 14. Shortly after landing, the small rover was deployed and began its patrol of the crater-pocked surface.

"Despite the seemingly premature demise of the Yutu rover, the Chinese have accomplished all of their major mission objectives," said Paul Spudis, a planetary geology and remote sensing expert at the Lunar and Planetary Institute in Houston.

"They have developed a lander spacecraft that can safely place payloads on the lunar surface… this ability translates into the ability to encounter and conduct proximity operations around any object in cislunar space," Spudis told Space.com. "The Chang'e 3 mission is a major advance in their spacefaring capabilities."

Chinese engineers at the Beijing Institute of Spacecraft System Engineering have previously noted that creative techniques in thermal control technology for the Chang'e 3 moon mission were called for, such as radioisotope heat, gravity-assisted fluid loops, heat pipes and other thermal control hardware and insulation.

Whether the Yutu rover, which weighs 308 lbs. (140 kilograms), has come out of its “cosmic coma” remains unknown. Prior to the onset of the lengthy lunar night, the Chinese moon rover experienced a mechanical control anomaly that may have spelled its doom.

What specifically happened to Yutu is not known, but the pervasive lunar dust is speculated to have possibly gummed up mechanisms on the rover.

According to Philip Stooke, associate professor in the Department of Geography at the University of Western Ontario in Canada, Yutu's camera mast, also carrying a high gain antenna, were supposed to fold down into a box on the rover body, and then be covered by one of the panels.

'That enclosed space is kept warm by a radioactive heat source. The second solar panel is tilted down and oriented to catch the rays of the rising sun," Stooke told Space.com. It appears that the first panel would not close, he speculated, with the expectation that the cameras would then be damaged by the cold and maybe other items in need of warmth too.

Farewell to Yutu from China's "netizens"

Prior to Yutu's launch toward the moon, Chinese space officials said the rover was projected to carry out tasks for three months. It totes nearly 45 lbs. (20 kg) of scientific instruments.

The rover successfully used its panoramic and navigational cameras, an arm tipped with an Alpha-Proton X-ray Spectrometer and a radar system attached to its underbelly to reconnoiter the moon’s subsurface.

The stationary lander is built to work for a year and has already made use of an extreme ultraviolet camera to observe the Earth's plasmasphere, as well as an optical telescope to view other celestial objects from the lunar surface.

When word came last month that Yutu might not endure its deep freeze, thousands of Chinese "netizens" posted their blessings to the robot.

As reported by the state-run Xinhua news agency, China's social networking circles were abuzz with farewells to the robot.

"You have done a great job Yutu. You have endured extreme hot and cold temperatures and shown us what we have never seen," wrote one Yutu supporter under the name "Amaniandlove," according to Xinhua. Hope you get well soon, but no matter what, it is your presence that makes the planet about 390 thousand kilometers away dazzling."