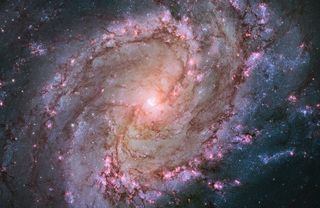 This Hubble Space Telescope image shows the full beauty of nearby spiral galaxy M83 in a mosaic of many photos stitched together. The magentas and blues indicate star-forming regions. Also known as the Southern Pinwheel, M83 is located 15 million light-years away in the constellation Hydra. Image released January 2014.
(Image: © NASA, ESA, and the Hubble Heritage Team (STScI/AURA))

A newly released Hubble Space Telescope mosaic image shows the nearby spiral galaxy M83 in rich detail and scientists want your help to understand exactly what they are seeing in the cosmic view.

Also known as the Southern Pinwheel, the galaxy lies 15 million light-years away in the constellation of Hydra. Bold magentas and blues indicate the galaxy blazes with star formation, and the galactic panorama depicts stellar birth and death on a vast scale of 50,000 light-years, encompassing thousands of star clusters, and hundreds of thousands of stars, as well as supernova remnants, the last vestiges of dead stars. You can also see a video exploring the galactic image.

But while this Hubble Space Telescope image is striking, it also serves a practical purpose. A new project called "STAR DATE: M83" asks amateur astronomers to use the new M83 image to estimate ages for approximately 3,000 star clusters. Interested space aficionados can use the presence or absence of the pink hydrogen emission, the sharpness of individual stars, and the color of the clusters to estimate ages, a task which computers would have trouble accomplishing.

The newest generations of stars form largely in clusters on the edges of the dark spiral dust lanes. These young stellar groupings are just a few million years old and produce a large amount of ultraviolet light, which is absorbed by surrounding diffuse gas clouds, producing their pinkish glow. Later, stellar winds from the youngest, most massive stars blow the gas away, revealing bright blue star clusters, and giving a perforated appearance to the spiral arms. These youngest star clusters measure about 1 million to 10 million years old. In comparison, populations of stars up to 100 million years or older appear yellow or orange because the young blue stars have burned out.

Researchers have found interstellar "bubbles" produced by nearly 300 supernovas from massive stars in the new Hubble image, captured during an exposure from 2009 to 2012. These supernova remnants can help astronomers better understand the nature of the stars that exploded, dispersing their elements back into the galaxy.