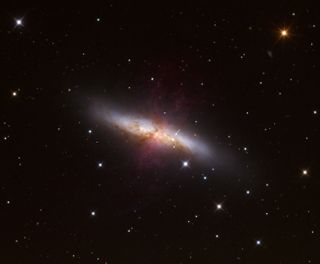 Adam Block sent SPACE.com this photo of the new supernova in Messier 82 on Jan. 23, 2014. He captured the image from the University of Arizona’s Mount Lemmon SkyCenter using a 32-inch Schulman telescope (RCOS), SBIG STX16803 CCD camera, and Astrodon Gen II filters. “Keep in mind this image is stretched in its brightness. The supernova is considerably brighter than any part of the galaxy and as it brightens it may outshine billions of stars in M82,” Block wrote SPACE.com in an email. An arrow shows the location of the supernova.
(Image: © Adam Block/Mount Lemmon SkyCenter/University of Arizona)

At 12 million light-years away, a new supernova that suddenly appeared in a nearby galaxy this week is the closest star explosion to be spotted from Earth in at least 20 years, so it's no surprise that it has captured the attention of stargazers.

Professional astronomers and amateurs skywatchers alike have rushed to their telescopes to capture images of the brilliant star explosion, which was discovered by students at the University College London. So far, astrophotographers from Puerto Rico to Arizona have sent SPACE.com stunning photos of the new supernova in the galaxy M82.

Adam Block sent in a photo of M82's newest bright spot as seen on Jan. 23, 2014 from the 32-inch Schulman telescope at the University of Arizona's Mount Lemmon SkyCenter. [See more amazing photos of the Cigar Galaxy's new supernova]

"The supernova is considerably brighter than any part of the galaxy and as it brightens it may outshine billions of stars in M82," Block wrote in an email. Indeed, some astronomers have predicted that as the supernova reaches it peak, it could be visible with just a pair of small binoculars. (M82 is also known as the Cigar Galaxy and is located in the constellation Ursa Major, or the Great Bear, visible from the Northern Hemisphere.)

Former NASA scientist Fred Herrmann of Huntsville, Ala., captured an image of the supernova in M82 on Jan. 22, 2014. Herrmann shared a shot of M82 that he took on Nov. 28, 2013, before the star explosion became visible; in that earlier image, not even a pinprick of light is visible in the spot where the supernova appeared.

Night sky photographer Mike Hankey also snapped a photo of the supernova from Auberry, Calif., on Jan. 23, and M82's new addition is even featured in an image snapped on Jan. 20 by Ezequiel Benitez in Isabela, Puerto Rico.

Because the new supernova is 12 million light-years away, the star explosion actually occurred 12 million years ago. But Earthlings are only getting a glimpse of this cataclysmic event now.

Supernovas aren't rare events in the universe, especially not in so-called starburst galaxies like M82 (which also goes by the name of the Cigar Galaxy). However, supernovas are rarely spotted so close to Earth. The last closest one was Supernova 1993E, first observed in 1993 in the galaxy M81, which, like M82, is about 12 million light-years away. Before that, Supernova 1987A appeared in February 1987 only about 168,000 light-years from Earth, in the Large Magellanic Cloud, a dwarf galaxy that's a satellite of the Milky Way.

The new supernova is especially exciting for astronomers because it's been identified as Type Ia — the kind of supernova scientists use to measure distances across the universe.

Editor's Note: If you snap an amazing picture of the new star explosion, or any other night sky view that you'd like to share for a possible story or image gallery, send photos, comments and your name and location to managing editor Tariq Malik at spacephotos@space.com.