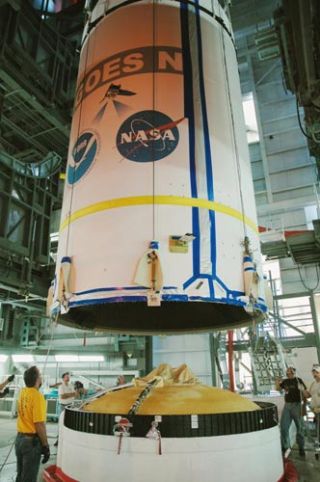 On Launch Complex 37 at Cape Canaveral Air Force Station in Florida, the GOES-N spacecraft is lowered toward the second stage of the Boeing Delta IV rocket for mating.
(Image: © NASA/Charisse Nahser.)

CAPE CANAVERAL - Boeing'sDelta 4 rocket is poised to return to flight this week for the first time in ayear and a half, and there's more riding on the launch than the weathersatellite on top.

"Much of our workloadis handled by the Delta fleet, and we've been down for a bit," said Col.Ed Bolton, who took over the Air Force's rocket-launching operations inDecember and is looking to get the over-budget and behind-schedule program backon track.

Job 1: the military needs aflightworthy Delta 4. One sure way to re-establish the rocket's reliability isto successfully launch and deliver to orbit the GOES-Nweather satellite this week.

Boeing'sDelta 4 is one of two rockets available to the government under the EvolvedExpendable Launch Vehicle program, and it's the one assigned to launch most ofthe U.S. military and spy satellites.

The vehicle last got offthe ground in December 2004, with the flawlessliftoff of the brutish, heavy version of the Delta 4, one of the mostpowerful rockets ever to launch from Cape Canaveral.

A fuel-sensorglitch caused the rocket's three first-stage engines to stop running beforethey should have, and the upper stage could not make up the difference.

Two university sciencespacecraft were lost and the military's payload, a weight simulator calledDemoSat, was dropped off 10,000 miles short of orbit. Had it been a realspacecraft, it would have been rendered useless space junk.

Boeing and the Air Forcedeemed the launch a "success," despite the fact that it failed tomeet the fundamental goal of getting the payload to the targeted orbit.

But this was a test flight,and prime among the goals was data-collection.

The team got lots of dataabout the performance of the new rocket and they say the data helped them solvethe fuel-sensor problem.

For 18 months, however, noDelta 4 has flown.

Then, batteries used topower the Deltas' safety-destruct system had to be replaced fleetwide.

Questions later arose aboutthe strength of a bonding and filling material used -- sort of like tile grout-- on some parts of the rocket. Several lesser technical issues also werefound.

Then, last fall, asprogress started to be made toward returning the Delta 4 to launch status,hundreds of Boeing rocket machinists walked off thejob in a dispute over pay and benefits.

In the case of almost everymission on Delta's manifest, work came to a screeching halt.

"That really hamperedour ability to get work done on the pads," Bolton said. "Boeing hasdone a good job getting that negotiation done."

The problems with the Delta4 came at troublesome times for the company and for the military rocket program.

The charges, part of alarger contracting-fraud investigation that Boeing this week said it is willingto pay $615 million to settle, led the Air Force to move $1 billion worth oflaunches from the Delta 4 to the rival Lockheed Martin Atlas 5.

Moreover, the government'stotal investment in the two rockets has grown from an estimated $17 billion tomore than $32 billion since its inception.

Part of that increase isbecause of a crash in the commercial space-launch market that forced theDefense Department to increase taxpayer subsidies to the two rocket fleets.Those subsidies included everything from cash to help pay bills at launch siteson both coasts to increased launch fees the companies charge for each mission.

Still, on a per-launchbasis, the program is meeting its goal of delivering launches for less thanthey cost under previous programs like Titan 4.

The other rocket in themilitary's program, Atlas 5, has flown several commercial and NASA missionsduring the Delta's grounding.

A slate of communicationsand intelligence satellites assigned to Deltas, however, have been stuck on theground along with the GOES-N weather satellite, which is scheduled to launch noearlier than between 6:11 p.m. and 7:11 p.m. EDT (2011-2311 GMT) Wednesday.

Now, it's time to get theminto space so they'll be ready when needed in years to come, Bolton said.

"We look at it asreturn to flight," Bolton said.

The coming flights of theDelta 4 also take on added importance because of NASA's recentdecision to use the rocket's RS-68 engines (rather than the shuttles' mainengines) for the cargo launcher for missions to the moon and Mars.

Thus, every flight of theDelta 4 becomes an opportunity to learn more about the engines and reduce therisk to those future exploration missions.

"We're going from alaunch rate of zero a month for more than a year" to five launches betweennow and July 20, he said.

The next heavy version ofthe Delta 4 could fly as soon as January.