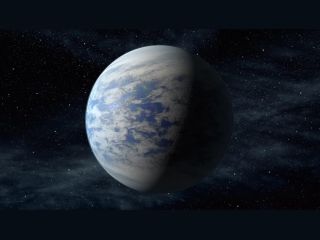 This artist's concept depicts Kepler-69c, a super-Earth-size planet in the habitable zone of a star like our sun, located about 2,700 light-years from Earth in the constellation Cygnus.
(Image: © NASA Ames/JPL-Caltech)

Kepler-69c is a planet that could be a "super-Venus" or a "super-Earth," depending on how habitable its surface is. At the time of its discovery, however, researchers said the planet had many similarities to Earth — and that it is orbiting a star much like our own sun.

Hailed as the most Earth-like alien planet when it was discovered, Kepler-69c is an exoplanet about 2,700 light-years from Earth. There has since been some debate about whether it is more like a Venus or an Earth. NASA, for example, noted that Kepler-69c's orbit of 242 days is close to what Venus has in our own solar system.

But at the time of its discovery, researchers were discussing the possibility of water, or even a global ocean, on its surface — one joked there could be clever dolphins there — because Kepler-69c appeared to be orbiting where liquid water was possible.

"This was very exciting because it's our first habitable-zone super-Earth around a sun-type star," astronomer Natalie Batalha, a Kepler co-investigator at NASA's Ames Research Center in Moffett Field, Calif., said at the 221st meeting of the American Astronomical Society in January 2013, when the planet candidate's discovery was made public.

"It's orbiting a star that's very much like our sun," Batalha added. "Previously the ones we saw were orbiting other types of stars."

The planet candidate was spotted by the Kepler Space Telescope, which found thousands of other candidates during its primary mission. Over the years, it has found several rocky planets that orbit in the habitable zones of their parent stars, although most of these stars are red dwarfs that are smaller and cooler than the sun. [Related: NASA Finds 1,284 Alien Planets, Biggest Haul Yet, with Kepler Space Telescope]

Compared with our own solar system, Kepler-69c's orbit around its star is slightly smaller than that of Earth — it's at a distance of about 70 million miles (112 million kilometers) compared to Earth's 93 million miles (150 million km). A year on Kepler-69c takes about 242 Earth-days to complete.

A few months after the announcement of the potentially habitable planet, researchers did a new analysis about its orbit and published it in Astrophysical Journal Letters. The team suggested that "even under optimistic conditions," the planet orbits too close to its star to be in the habitable zone. The amount of solar radiation it receives is similar to that of Venus, said the team (which was led by Stephen Kane, an assistant professor at San Francisco State University).

Later in 2014, researchers again led by Kane suggested that there should be a "Venus zone" defined for Kepler discoveries. In the Astrophysical Journal Letters, the team specifically cited their own paper on Kepler-69c. They said the planet was initially believed to be habitable, but likely fell more into a Venus category upon further analysis. The group further identified 43 potential Venus analogs, and defined how often they tend to occur for different types of dwarf stars.