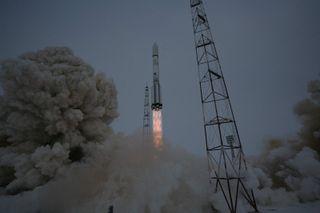 A Proton rocket fired away from the snow-covered Baikonur Cosmodrome in Kazakhstan on Thursday, completing a series of maneuvers before deploying a Russian civil communications satellite in orbit nine hours later.

The 19-story rocket quickly disappeared into a soupy cloud deck hanging over the Baikonur Cosmodrome, where temperatures hovered near freezing and a coating of snow blanketed the arid terrain.

The three-stage Proton rocket hurled the Express AM5 communications satellite and a Breeze M upper stage on a ballistic trajectory just shy of the velocity required to attain a stable orbit around Earth. Ten minutes after liftoff, the Breeze M separated from the Proton's third stage, according to the Russian Federal Space Agency.

The Breeze M's engine ignited four times to boost the Express AM5 satellite into the correct orbit. It released the payload at 2012 GMT (3:12 p.m. EST), according to the Russian Federal Space Agency. [See launch photos and video from Spaceflight Now]

Canada's MDA Corp. built the satellite's repeater and antennas. Russia's Radio Research and Development Institute, known by the acronym NIIR, designed and manufactured the craft's communications payload, according to Reshetnev.

The satellite is designed for a 15-year lifetime and will be positioned in geostationary orbit at 140 degrees east longitude, covering Russia's Far East, Southeast Asia and Australia. Such an orbit allows the spacecraft to remain in a fixed location in the sky for users on the ground.

Express AM5 carries 40 Ku-band, 30 C-band, 12 Ka-band and two L-band transponders, according to RSCC.

The satellite will provide digital television and radio broadcasting, telephone, video conferencing, data transmission and Internet services. Like other satellites owned by RSCC, Express AM5 will also be used for mobile communications among between the Russian president and other government leaders, the company says on its website.