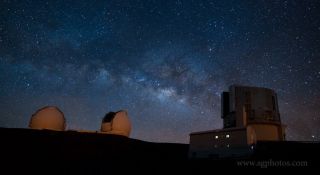 Sean Goebel, a graduate student in astronomy at the University of Hawaii at Manoa, created the new Hawaii night sky video from photographs shot on three consecutive nights in April and four nights in the summer of 2013.

The film features the night sky progression over Mauna Kea, a 13,803-foot (4,207 meters) mountain on Hawaii's Big Island, and its many telescopes. The Keck, Gemini and Subaru telescopes each have lasers, which are used to remove the blurring effects of Earth's atmosphere using adaptive optics.

Goebel set up his cameras on nights when the weather was clear, the moon was small and when he knew the telescopes would be running the lasers. On some of the nights, astronomers were using the lasers to observe the black hole at the center of the Milky Way.

Goebel said he made the video just for fun. "I like astronomy and I like photography, and I like to make pretty videos," he told SPACE.com.

Goebel has made a handful of other time-lapse videos of Death Valley, Yosemite and other places, but his Mauna Kea video has been especially popular.