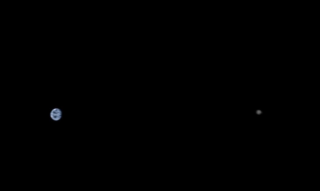 NASA's Juno spacecraft captured an amazing "starship-like view" of Earth and the moon as it made a speedy flyby past our planet on its way to Jupiter in October.

"If Captain Kirk of the USS Enterprise said, 'Take us home, Scotty,' this is what the crew would see," Scott Bolton, the principal investigator for Juno at the Southwest Research Institute, said in a statement from NASA. "In the movie, you ride aboard Juno as it approaches Earth and then soars off into the blackness of space. No previous view of our world has ever captured the heavenly waltz of Earth and moon."

Earth and the moon first came into Juno's view when the spacecraft was about 600,000 miles (966,000 kilometers) away, NASA officials said. Since Juno itself was spinning, the images had to be taken from the same Earth-facing angle each time.

"Everything we humans are and everything we do is represented in that view," John Jørgensen of the Danish Technical University, said in a statement.

The Juno spacecraft launched on Aug. 5, 2011, riding an Atlas 5 rocket into space from a pad at the Cape Canaveral Air Force Station in Florida. The spacecraft only had enough power to reach the asteroid belt before the sun's gravity pulled it back toward the inner solar system. As such, mission planners had to chart a circuitous route for Juno to get it to its destination.

As it zipped past the planet, the spacecraft's JunoCam also captured a stunning picture of Earth with a higher resolution than the newly released images.

Additionally, ham radio operators from around the world had a chance to say "HI" to Juno during the flyby by coordinating radio transmissions with a Morse-coded message. The radio signals were recorded by Juno's Waves instrument, which eventually will measure radio and plasma waves in Jupiter's magnetosphere, according to NASA.

Mission officials say Juno is now on course to arrive in a polar orbit around Jupiter on July 4, 2016. The spacecraft is supposed to circle the planet 33 times, using its instruments to peer beneath the dense cloud cover that hides our solar system's largest planet.

Scientists hope the $1.1 million mission will help answer longstanding questions about Jupiter — such as whether or not it has a core — and that it will shed light on the planet's origins, atmosphere and magnetosphere.