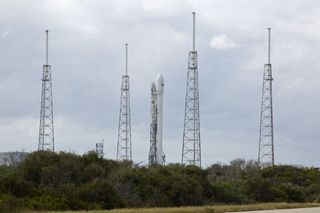 The private spaceflight company SpaceX will celebrate the Thanksgiving holiday with a rocket launch from Florida today (Nov. 28) after a two-day delay due to a technical glitch.

SpaceX is expected to begin its launch webcast at 5 p.m. EST (0000 Nov. 26 GMT). SPACE.com will carry SpaceX launch webcast live here. You can also follow it directly at: http://www.spacex.com/webcast/

The mission is SpaceX's first entry into commercial satellite industry with the Falcon 9 rocket. The Hawthorne, Calif.-based company has launched six Falcon 9 rockets since 2010, but those missions were either test flights or missions for NASA or the Canadian Space Agency. SpaceX officials have often said that spaceflight is inherently risky, and if their missions don't go as planned the company will learn from them and try again.

SpaceX has a $1.6 billion deal with NASA to fly at least 12 commercial cargo missions to the International Space Station using its two-stage Falcon 9 rockets and unmanned Dragon space capsules. The company has flown two of those missions so far. On Sept. 29, SpaceX launched the Canadian Space Agency's CASSIOPE space weather tracking satellite during a test flight of its upgraded Falcon 9 rocket, known as the Falcon 9 v1.1.

The enhanced Falcon 9 features a circular "Octaweb" arrangement of its nine first-stage rocket engines. The engines themselves are new SpaceX-built Merlin 1D engines that boast better performance. The Falcon 9 is also topped with a 17-foot (5.1 meters) payload fairing that is large enough to fit a bus inside, as well as triple redundant avionics and a heat shield for the first stage as part of SpaceX's reusable rocket project.

SpaceX's Falcon 9 rocket launch is not the only cosmic event this Thanksgiving. Astronauts on the International Space Station are celebrating Thanksgiving in space with the Comet ISON today. The astronauts will try to photograph the comet along with NASA and scientists around the world as ISON swings close by the sun today.

NASA will hold a webcast at 1 p.m. EST (1800 GMT) to provide live satellite views and updates on Comet ISON's solar passage. You can watch the Comet ISON webcast live on SPACE.com, courtesy of NASA TV.

Visit SPACE.com for updates on the SpaceX next-generation Falcon 9 rocket launch. SPACE.com partner Spaceflight Now is also offering updates via its SpaceX Mission Status Center, which will also include a launch webcast.