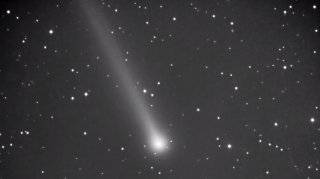 The video of two incoming comets, captured on Nov. 11, shows the incoming Comet ISON with its long wispy tail as well as the newfound Comet Lovejoy, which is gradually brightening. The icy wanderers seem to move quickly against a backdrop of stars because Ng used a relatively small field of view and the long exposures to snap the images, the photographer said in his description of the videos.

You can see a high-definition vide of Ng's video via his Vimeo website here.

Comets ISON and Lovejoy are both headed for a dangerous dive toward the sun much to the delight of skywatchers and astronomers.

Some astronomers have said Comet ISON could be the "comet of the century" if it doesn't get ripped apart when it zips within 730,000 miles (1,175,000 km) of the solar surface on Nov. 28. It has brightened rapidly in the past few days, and in dark places, ISON is now visible to the naked eye in the southeastern pre-dawn sky, though it can be more clearly seen through binoculars and telescopes. Ng captured his images of ISON as it moved in front of the constellation Virgo.

ISON's new companion Comet Lovejoy was only discovered in September 2013 by Terry Lovejoy, an Australian amateur astronomer. Lovejoy discovered another sungrazing comet that put on a dazzling show in December 2011. His new discovery is officially designated C/2013 R1 and it will make its closest approach to the sun on Dec. 22 at a distance of 75.4 million miles (121.4 million kilometers). Ng's photographed Comet Lovejoy as it passed the constellation Leo.

More of Justin Ng's photos can be found on his website: http://www.justinngphoto.com/