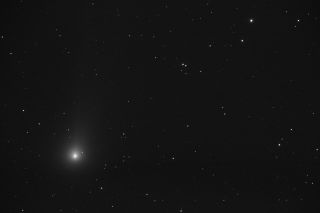 The potentially incredible Comet ISON has a companion in the morning sky.

The morning sky currently plays host to a newly discovered comet, which is at the present moment is actually higher in the sky, noticeably brighter and easier to see than the most-ballyhooed Comet ISON.

The new comet was discovered by Australian amateur astronomer Terry Lovejoy. Lovejoy discovered a spectacular sungrazing comet in December 2011 and discovered the one gracing the skies now, his third comet, on Sept. 7. [Amazing Comet Photos of 2013 by Stargazers]

This one, designated C/2013 R1 was found on CCD imagery to the southeast of the constellation Orion. Based on confirming observations from other amateurs, the comet was estimated to be around magnitude 14.4 — or nearly 1,600 times too faint to be seen with the unaided eye.

However, the new comet began to quickly brighten on its way in toward the sun and will arrive at perihelion — its closest point to the sun — on Dec. 22 at a distance of 75.4 million miles (121.4 million kilometers).

As of Nov. 6, based on a consensus of worldwide observers, Comet Lovejoy had reached magnitude 6.5, which is considered to be the threshold of naked eye visibility in a dark sky, far from any bright lights.

On Saturday, Nov. 9, Long Island observer Frank Mellilo headed out to look for Comet ISON, but discovered it was behind the roof of a nearby house.

"I was ready to wrap it up for the night," he wrote, "But then I remembered about Comet Lovejoy. It was right under my nose while I was waiting for ISON. I took my 10X70 binoculars and I got the comet right away.  It has a faint smudge tail to the west. So at least, I wasn't disappointed by not sighting ISON!  It’s worth taking a look at Lovejoy!" [Amazing November Night Sky Photos by Stargazers]

The new comet is getting progressively brighter with each passing day.  This is because while en route to its Dec. 22 rendezvous with the sun, Lovejoy will make its close approach with Earth  on Nov. 19, when it will pass within 36.9 million miles (59.4 million km) of the planet.

At its best around that time, Comet Lovejoy "might" become as bright as magnitude 4.5, still a moderately faint object, yet bright enough to be glimpsed with the naked eye and certainly a fine object for binoculars and small telescopes.

Unfortunately, the moon will be two days past full that morning and well up in the west, lighting up the sky, probably preventing any naked eye viewing opportunity.

After crunching the numbers based on the latest set of orbital elements from the Minor Planet Center, in the coming days, the comet will be moving northeast through the constellations of Leo and Leo Minor.

Next Sunday (Nov. 17), stargazers will be able to locate Comet Lovejoy using the Big Dipper, which will be standing on its handle high in the east-northeast sky just before the break of dawn. By extending an imaginary line through the two stars at the end of the dipper's bowl — the famous “pointer” stars, Dubhe and Merak — to the north you would come to Polaris, the North Star.

But on Nov. 17, extend the line the other way, about four times the distance between the two stars; Lovejoy will be a short distance to the west (right) of this line. With binoculars, look for a fuzzy patch of light with an almost star like center and perhaps a faint appendage extending upward and to the right of the center. That is the tail of the comet pointing away from the sun.

After that, the comet will continue to race northeast into the constellations of Canes Venatici on Nov. 21, then, as it moves away from the Earth it will slow down as heads east, then southeast into Bootes on Nov. 27, cuts across Corona Borealis Dec. 4-11 and then into Hercules, passing a few degrees south of the quadrilateral of stars popularly known as the “Keystone” on Dec. 17.

During all of this time as it moves away from the Earth, it will be fading — though very slowly — probably glowing between 5 and 6 magnitude, just barely visible to the eye on dark, clear nights.

But Lovejoy may very well be overshadowed at that time by Comet ISON, as the two comets will passing each other between Dec. 18 and 20. They won’t get much closer than 10 degrees from one another, and Lovejoy should be just a faint, fuzzy blob, while observers hope that ISON will have evolved into a lovely celestial showpiece by then.

Incidentally, based on latest orbital calculations, Comet Lovejoy is not due back for at least 7,000 years.  So if you miss it on this go around, don’t wait up for it.

Editor's note: If you snap an amazing picture of Comet ISON, Comet Lovejoy or any other night sky view that you'd like to share for a possible story or image gallery, send photos, comments and your name and location to managing editor Tariq Malik at spacephotos@space.com.