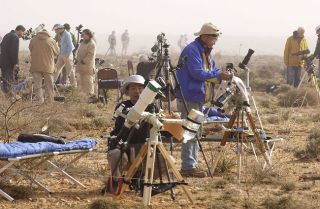 OK, I've done the math. What you always suspected might be true ... is true: namely that the best place in the solar system to see a total solar eclipse is Earth.

The moon, that dimpled ball of dusty rock that winds around our planet every 29 days, kindling the muse in poets and sprouting hair on werewolves, just happens to be of the right size and distance to barely cover the Sun's disk. And, thanks to the inexorable clockwork of orbital mechanics, that circumstance results in a total solar eclipse, somewhere on our planet, about once every 1.6 years. As it is, I've seen a half-dozen, most recently in Egypt, on March 29.

Since there are more than 150 moons in our solar system, you might think that plenty of other worlds would be occasionally treated to such a celestial shadowing. But unlike Earth, our fellow planets have failed to win the eclipse lottery.

Mercury and Venus would be dandy places to see an eclipse (ignoring the lethal weather) since the Sun would loom large in the sky, showing up well in point-and-shoot photos. But neither has a moon. Other planets are saddled with satellites that generally appear either too large in the sky or too small. For example, the four Galilean moons of Jupiter (Io, Europa, Ganymede, and Callisto) are all hefty enough to block the Sun. Unfortunately, they block too much. The prominences and inner corona that are so spectacular during earthly eclipses quickly disappear behind one of these massy moons.

Admittedly, Saturn's satellite Janus just barely covers the Sun, and might make a good eclipser if you managed to hie yourself to the top of the ringed planet's poisonous atmosphere for a gander. But Janus is a pockmarked potato of a moon, an oblong rock only a bit more than 100 miles in size, so it would blot the Sun with an irregular, dark oval; a rather poor esthetic in comparison to our own moon's pleasingly circular disk. Worse than that, Janus orbits Saturn in less than 17 hours, which means the entire eclipse would be over in fewer than 10 seconds.

Cordelia, Ophelia, and Rosalind - which sound like members of the Vassar field hockey team, but are in fact among Uranus' lesser moons - are of the right overall size and distance to just block the Sun as seen from that blue ball of a planet. But these are puny, punk moons, and probably just as misshapen as Janus. In addition, the Sun as viewed from Uranus is no more than a bright star (about 1-1/2 arcminutes, or smaller than a pencil point at arm's length), so even when it does get covered up, the eclipse is but a star-wink. Hardly worth the trip.

Mark yourself lucky to live on a planet where a solar eclipse is both possible and spectacular. And even luckier to be around when jet engines and cruise ships make it easy for thousands of people to journey to any eclipse's narrow shadow path. For our grandparents and all their ancestors, who mostly died in the villages of their births, the chances of catching a total solar eclipse during a lifetime was about one in seven. Seeing as many as two was about as common as giving birth to quints.

That's changed, as was obvious on March 29, when thousands of tourists hunkered down on the flat, treeless Libyan plateau just east of El Saloum, a coastal town only a few miles from the Egypt-Libya border. Looking around in the cold, early morning, I beheld a scene that looked like the mother of all scout jamborees: the Italians were sprawled a few hundred feet to the north, with the Japanese hard up against their tents. The French were off by themselves, while the Germans crowded near our own patch of dust and rock. Strange accents and a white fog wafted through the landscape, although everyone was confident the rising Sun would burn off the milky miasma before the eclipse began. Some people worried (unnecessarily) that the fog might be replaced by a gritty sandstorm, blown out of the Sahara. For hours, the tourists had been amusing themselves with food, small talk, and endless adjustments to their telescopes and cameras. A quarter-million miles above, the invisible new moon slid silently towards its intercept with the Sun.

In millennia past, eclipses (like comets) were unexpected and unwelcome phenomena, and generally took the rap for anything bad that happened the same year. Empress Suiko of Japan died in 628 AD, and an eclipse was blamed. Louis of Bavaria, son of Charlemagne, also expired in the year of an eclipse. Charlemagne's empire was soon sundered into what became Italy, France, and Germany. In the seventeenth century, panicked Chippewa launched flame-tipped arrows skyward to reignite the doused Sun (with remarkable success).

It's peculiar to think that a ball of rock getting in front of a ball of gas could so easily agitate our ancestors. But after scientists of the Renaissance figured out what eclipses really were, these celestial shows morphed from being bad omens to good opportunities for research. Helium, the second-most abundant element in both the cosmos and balloons, was discovered spectroscopically during a solar eclipse in 1868. In 1919, British astronomers confirmed Einstein's theory of General Relativity by measuring the positions of stars flanking the Sun's darkened disk.

Today, all it takes to see an eclipse is to be on board the Shuttle or Space Station, and hold a dime four feet in front of your eyes while looking at the Sun. So Earth-bound eclipses have become the provenance of amateurs and tourists. Many of these eclipse chasers are quite savvy about what to see, and how to photograph it. Indeed, as I looked around our viewing site minutes before totality, I reckoned there was more equipment on this coastal desert plain than at any time since Montgomery had faced off against Rommel.

The moon's size and orbit cause it to raise large tides on Earth's oceans (the Sun's contribution to the tides is only half as large). Some researchers think that tides may have been important in the evolution of life. It's interesting to note that, since tides depend on distance cubed, if you move the moon twice as far away, it would need to be eight times as massive to cause tides of the same strength. But a moon this size would be twice the diameter of our present moon, and therefore would still perfectly eclipse the Sun. Move the moon closer or farther: if the tides are the same, the moon will be perfectly dimensioned for blocking the Sun. If tides really do encourage life, then worlds with tides similar to ours are also likely to enjoy total eclipses. Maybe eclipse chasers are a common cosmic breed.

With seconds to go, a subtle darkness swept quietly across the sky from the south. The landscape dimmed quickly; cameras clicked as a "diamond ring" lit up on the moon's eastern rim, and then, suddenly, the sky was a purple canopy punctured by a black, haloed hole. The newbies - those who were seeing an eclipse for the first time - let loose with enthusiastic whoops. Eclipse veterans pretended to greater sophistication: "judging by the linearity of the coronal streamers, the magnetohydrodynamics seem unusually quiescent, don't you think Ralph?"

Total solar eclipses are remarkable and seductive. If you see one, you'll want to see more (your next opportunity is August 1, 2008). But don't wait too long. The moon is edging away from Earth at about 1-1/2 inches per year. At that rate, we only have 500 million more years of eclipses to go. Book a trip while you can.

Note: Seth Shostak was a lecturer on a recent eclipse trip to Egypt arranged by MWT Associates.