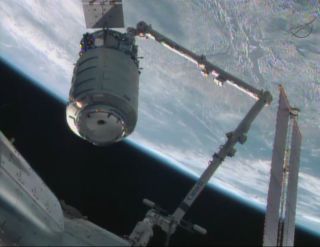 The first commercial Cygnus spacecraft is moved into docking position by the International Space Station's robotic arm on Sept. 29, 2013 after arriving at the orbiting lab during a major test flight by spacecraft builder Orbital Sciences Corp.
(Image: © NASA TV)

Cargo delivered to the International Space Station by Orbital Sciences' Cygnus spacecraft is now completely unloaded from the commercial resupply ship and aboard the orbiting laboratory.

Astronauts on the space station opened Cygnus' hatch on Sept. 30 after its historic first launch atop an Antares rocket from NASA's Wallops Island Flight Facility on Sept. 18. After launch, mission controllers on the ground took Cygnus through a variety of test maneuvers before it was allowed to approach the station.

Once the supply ship leaves the station, it is designed burn up in Earth's atmosphere. International Space Station crewmembers have now loaded a layer of trash onto Cygnus. "The crew will be working this week loading the second layer of trash," Orbital Sciences officials wrote in a mission update on Oct. 7. The third layer will be loaded the week of Oct. 14, and the capsule is set to leave the station on Oct. 22, re-entering the atmosphere on Oct. 24, Orbital officials said.