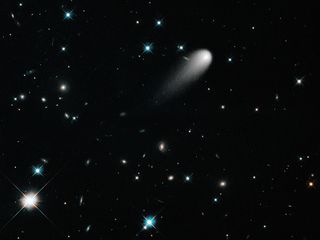 The sun-approaching Comet ISON floats against a seemingly infinite backdrop of numerous galaxies and a handful of foreground stars in this amazing space wallpaper taken in April 2013 by NASA's Hubble Space Telescope.
(Image: © NASA, ESA, and the Hubble Heritage Team (STScI/AURA))

A colossal NASA balloon is poised to carry a free-hanging gondola sky-high on a mission to take a gander at celestial grandeur: Comet ISON.

Weather permitting, NASA's Balloon Rapid Response for Comet ISON (BRRISON) gondola and science instruments are to ascend from the space agency's Scientific Balloon Facility in Fort Sumner, N.M., possibly by Sunday (Sept. 29). The one-day balloon mission's target is Comet ISON, an incoming comet that some scientists have billed as a potential "comet of the century" because it could flare up to spectacular brilliance after a close flyby of the sun in late November.

Reports from Fort Sumner by the BRRISON team are upbeat. The team has had a series of successful pointing tests with the gondola hanging from a crane inside an opened door hangar and with project instruments acquiring test shots of star fields and planets, said Andrew Cheng, BRRISON principal investigator and chief scientist in the Space Department at Johns Hopkins Applied Physics Laboratory (APL) in Laurel, Md.

The team had hoped to launch BRRISON by this week, although weather issues at the New Mexico launch site could force a delay to the weekend.

"We did come here to the launch site a week late because of problems with the infrared camera, but they've been overcome," Cheng told SPACE.com. "I expect we’ll be flight-ready by Thursday this week and may fly Friday. I'm concerned about the weather … chances of being able to launch Friday or Saturday are poor, and Sunday may be a better bet," he said.

The BRRISON science balloon will fly on a zero-pressure balloon. It is the first NASA Planetary Science Division balloon mission to observe a comet.

The large helium-filled balloon will carry the instrument-carrying gondola to near space, soaring up to 120,000 feet (36,576 m) altitude. That’s almost 23 miles (37 kilometers) above the Earth. By sending the balloon to that height, the gondola instruments are flying above most of the atmosphere and they should be able to view Comet ISON more clearly.

"One of the goals of the ultraviolet-visible bench is to demonstrate that we can stabilize a suspended telescope at the sub-arc second level in order to take advantage of the near-space seeing conditions at 120,000 feet," said BRRISON team member Eliot Young, a principal scientist at Southwest Research Institute in Boulder, Colo. [Comet ISON: Evolution of a Potentially Great Comet (A Timeline)]

Young told SPACE.com that the team has exercised the gondola’s coarse pointing system and a fine steering mirror during a "hang test" on Sept. 22.

It was a gusty night, Young said, and the line of sight was limited, but the gondola’s Altazimuth (ALT/AZ) mounts permitted precise motion of the telescope tube in vertical (altitude) and horizontal (azimuth) directions. ALT/AZ motors kept a test source well within the desired field of view.

A guide camera was able to find and "centroid" — average position of an object — on a star at about 100 frames per second, and most of the motion of the buffeted telescope was corrected for, Young said.

"We hope that the conditions in the stratosphere will be less severe," Young said, enabling "better image quality to help us get more accurate centroids and milder wind buffeting to overcome," he told SPACE.com.

Comet ISON is an Oort cloud comet and scientists suspect the celestial wanderer is making its first — and potentially last — voyage into the inner solar system.

The comet was discovered in September 2012 and is a sun-grazer, meaning it will pass extremely close by the sun on Nov. 28. The sun's gravity may well tear Comet ISON apart by tidal forces. But BRRISON will observe Comet ISON before it plunges close to the sun, while it is still outside Earth's orbit distance.

During its observing trek, data gleaned by BRRISON will be recorded onboard and analyzed after landing.

In addition to observing Comet ISON, scientists plan to have BRRISON observe several other targets during its flight, including Comet Encke; moons of Jupiter; and the hydrated (water-bearing) asteroids 24 Themis and 130 Elektra.

From high above Earth's atmosphere, the BRRISON initiative is to focus on several scientific questions, such as:

Editor's note: If you snap a photo of Comet ISON, or any other night sky object, and you'd like to share it for a possible story or image gallery, please contact managing editor Tariq Malik at spacephotos@space.com.

To learn more about the comet's trip through the inner solar system, visit SPACE.com's complete coverage of Comet ISON.