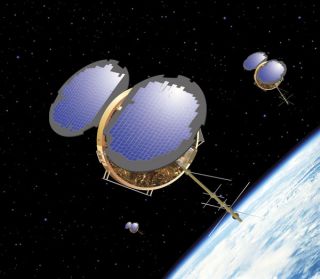 BOULDER, Colorado - A novel constellation of satellites will be lofted into Earth orbit this week, the first to provide atmospheric data daily in real time over thousands of points on Earth for both research and operational weather forecasting.

How they will accomplish the task is innovative too: by measuring the bending of radio signals from the U.S. Global Positioning System (GPS) as the signals punch through Earth's atmosphere. The technique can be used to track hurricanes, climate change, as well as monitor space weather conditions.

This unique probing of Earth's atmosphere is the product of an agreement between the American Institute in Taiwan and the Taipei Economic and Cultural Representative Office in the United States.

The $100 million satellite network is tagged the Constellation Observing System for Meteorology, Ionosphere and Climate - or COSMIC for short-- in the United States and FORMOSAT-3 in Taiwan.

The array of spacecraft is rooted on a system design provided by the University Corporation for Atmospheric Research (UCAR), based here. UCAR is a consortium of 69 universities focused on atmospheric and related sciences.

Taiwan's National Science Council and its National Space Organization provided over $80 million for the system. The U.S. National Science Foundation, lead agency for COSMIC science activities, and its partners - such as NASA, the National Oceanic and Atmospheric Administration (NOAA), the U.S. Air Force Space Test Program, the Office of Naval Research -- provided the rest of the support.

An Orbital Sciences Corporation (OSC) Minotaur rocket is scheduled to loft the constellation of six satellites on April 14, lifting off from Vandenberg Air Force Base in California.

The joint project between the U.S. and Taiwan is poised to transform weather forecasting, climate monitoring, and research on space weather.

The six microsatellites -- each weighing roughly 137 pounds (62 kilograms), including fuel - are just over a few inches deep but are fully loaded with four GPS antennas; a Tiny Ionospheric Photometer (TIP) to calculate the total electric density of the area where the satellite faces the earth; and a Tri-Band Beacon to transmit radio signals at three different frequencies.

COSMIC satellites are to be deployed in circular orbit around the Earth, at an altitude of some 435-500 miles (700-800 kilometers). Once unleashed in space, the satellites are expected to reach their mission orbits in thirteen months.

Originally developed for the ORBCOMM data communications network, OSC's MicroStar spacecraft design has been adapted to the COSMIC mission.

Master of the occultation

Once in Earth orbit the COSMIC microsatellites will track radio signals from the GPS satellites as they cut through Earth's atmosphere. GPS signals undergo changes in frequency and amplitude when they encounter water vapor or other physical components of the atmosphere.

Those changes can be measured using a process called radio occultation. That is, molecules in the air bend GPS radio signals as they pass through (are occulted by) the atmosphere.

By measuring the amount of the bending, research scientists can determine underlying atmospheric conditions, such as air density, temperature, and moisture, and electron density.

COSMIC satellites will take approximately 2,500 measurements every 24 hours in a nearly uniform distribution around the globe. Because the satellites' radio signals pierce thick cloud cover and precipitation, weather conditions will not interfere with data gathering.

The altered signals are to be turned into valuable views of humidity and temperature throughout the lower atmosphere. Information about the electrical structure of the upper atmosphere, Earth's gravitational field, and other data will also be extracted. Researchers and forecasters around the world will have access to the data via the Internet.

Temperature and water vapor profiles derived from the GPS data should prove helpful to meteorologists that observe, research, and forecast hurricanes, typhoons, and other storm patterns over the oceans, as well as improve many areas of weather prediction. The stability, consistency, and accuracy of the measurements should be a boon to scientists quantifying long-term climate change trends, according to COSMIC experts at UCAR.

Additionally, COSMIC measurements of electron density in the ionosphere are expected to enhance analysis and forecasting of space weather, including geomagnetic storms that can disrupt sensitive satellite and communications systems and even impact power grids on the ground.

The COSMIC system is a gap-filler of sorts. It will yield data over vast stretches of the oceans where there are no weather balloon observations. And the data's high vertical resolution will complement the high horizontal resolution measurements of several now-on-duty weather satellites.

While the science and technique of GPS radio occultation (RO) was tested in several other missions, there are three aspects of COSMIC that stand out contrasted to those earlier efforts, William Kuo, director of the UCAR COSMIC office told SPACE.com.

Moreover, COSMIC will produce approximately 2,500 occultation soundings, which would provide nearly uniform coverage around the globe, Kuo added. "This is particularly important for weather prediction and climate monitoring over the oceans and remote areas."

Kuo also pointed out that COSMIC will make use of the newly developed "open-loop tracking technique" which would allow deep penetration into the Earth's troposphere - a region of our atmosphere that starts at the Earth's surface and extends 5 to 9 miles (8 to 14.5 kilometers) high.

Kuo noted: "We can get high quality sounding to within 1,640 feet (500 meters) of the surface...even over the tropics. This will provide valuable information on atmospheric water vapor, which is important for hurricane and severe weather prediction."

As the launch of COSMIC draws closer, so does the anticipation of new data, Kuo explained.

"I am very excited about the project. The planning for this started in the fall of 1997. Nine years have passed since then. I firmly believe that COSMIC will revolutionize atmospheric remote sensing for weather prediction, climate monitoring, and space weather forecasting. GPS radio occultation technique is very accurate, of high vertical resolution, and is also very cost-effective," Kuo said.

Kuo said that he felt fortunate to be involved with the effort, helping to bring the scientists and engineers from Taiwan and the U.S. together to collaborate on the project.

"It is a once in a lifetime experience," Kuo concluded.