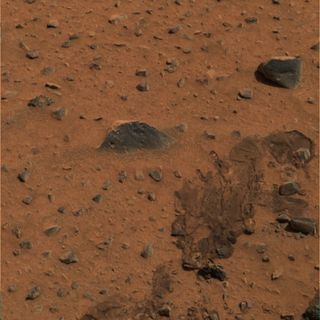 Mars Exploration Rover Spirit took a look at the trail left by the its airbags. The drag mark was made after the rover landed and its airbags were deflated and retracted. Scientists dubbed the region the "Magic Carpet" after a crumpled portion of the soil that appears to have been peeled away (lower left side of the drag mark). Rocks were also dragged by the airbags, leaving impressions and "bow waves" in the soil. Image
(Image: © NASA/JPL/Cornell)

DENVER, COLORADO -- A future astronaut traipsing across the landing sites of the Mars Exploration Rovers - Spirit and Opportunity - might be squishing into a welcome mat of microbes, according to one NASA scientist.

While the twin robots push ahead in scouring their real estate locations at Gusev Crater and Meridiani Planum, they leave behind a tantalizing trail of issues that need to be sorted out.

One big unknown: Did life ever take root on Mars? And if so, is that planet home to living organisms today? So far, the life-on-Mars card has not played out. Rover scientists have seen nothing they regard as needing a biological explanation.

But the twin robot landers weren't built to prowl around for life. What they have done is set the stage for a more focused hunt that could unveil the "living will and testament" of biology on Mars, if it ever existed in the first place.

And according to David McKay, chief scientist for astrobiology at NASA's Johnson Space Center in Houston, Texas, visual evidence from the rovers is pretty enticing.

The chronicle of Mars being viewed as a comfy habitat for biology is an unfolding one, McKay says.

McKay, Mars and controversy go way back. He led the research group that in August 1996 presented evidence of ancient life from Mars. The observations, they researchers said, strongly suggested primitive life may have existed on Mars more than 3.6 billion years ago.

The NASA-funded team found the first organic molecules thought to be of Martian origin, several mineral features characteristic of biological activity, and possible microscopic fossils of primitive, bacteria-like organisms inside of an ancient Martian rock that fell to Earth as a meteorite - the often-called "Mars Rock" or as scientists like to professionally label it: ALH84001.

"I've seen the saga move from 20 or 30 years ago when virtually no one believed there was life on Mars...or that there was even water on Mars," McKay said last week at the International Symposium on Optical Science and Technology, the 49th annual meeting of Society of Photo-Optical Instrumentation Engineers (SPIE). "Now the whole pendulum is swinging."

McKay said it is now clear water flowed across Mars. A lot of water, in fact. Furthermore, there may still be water spurting out onto the planet at certain times. "The same pendulum may be swinging back toward life," he said. "We'll wait and see. These are exciting times."

The Mars rovers represent an incredibly successful mission, McKay said. Moreover, they seemingly have "uncovered" a major find. He points to pictures taken by the rovers that show areas of the martian surface disturbed by the retraction of landing airbags.

Patches of surface "acted as a cohesive blanket of some sort" when the airbags pulled back, McKay explains. "It wrinkled...and pulled along rocks with it. It didn't simply crack apart like a dried-up crust."

Why the soil reacted in such a manner remains obscure, McKay admits. "But one possibility is that this is the fossilized remains of a biological mat of some sort," he speculated. The mat would be made up of bacterial parts and pieces.

That claim can't be proven at this point, McKay said. "That's one reason you have to go get samples to be sure."

Swept under the Magic Carpet

Mars has all the conditions for life: water, energy, and organic substances, McKay pointed out.

"It is very clear that Mars was a habitable place in terms of life as we know it. In addition to that, from the meteorites, we think there's evidence that, in fact, there was microbial life on Mars," McKay said. "And for all we know, there still could be. It's hard to kill off life once it has started."

Early in the mission of Spirit at Gusev Crater, scientists dubbed the region messed up by landing bags as the "Magic Carpet." The crumpled portion of the soil appeared to have been peeled away, as noted by rover scientists.

"I think there's really something there," McKay told SPACE.com. "There is some cohesiveness to that material. Talk about the Magic Carpet just went away. I don't think it should have gone away."

He pointed to work being done at Guerrero Negro, Baja California by NASA's Ames Research Center on the evolution of a microbial community functioning in microbial mats.

"They've also produced some in the lab. You pick that stuff up and it's kind of like a fabric. It is fairly cohesive. A crusty material like dura crust breaks up immediately," McKay said.

According to a NASA Ames web site, microbial mats here on Earth are important because their 3.4-billion-year fossil record indicates they are our planet's oldest known ecosystems.

"There are two extremes here," McKay added. "If you accept the hypothesis that what's been seen is a microbial mat on Mars, is it an old one or a living one?"

On one hand, given moisture and becoming a little wetter than usual, a growing martian mat is conceivable. "One could also argue that it's a very old mat, formed at the base of an ocean or lake. Perhaps it's two billion years old. I have a lot of trouble figuring out how to tell those ideas apart," McKay said.

With each Mars rover toting science gear, including a Microscopic Imager, why then hasn't the microbial mat issue been resolved, quite literally? Because the robots carry no instrument that can really detect life or report there's no life, McKay says. "That's a bit frustrating. But they weren't intended for that purpose."

Microbial mat structures, biofilm, or other possible structures are just out of range of the microscope's focusing power. "The resolution of the Microscopic Imager sort of falls apart right when it starts to get interesting," McKay said.

Fossils of microbial life are difficult to find even on Earth, with the most sophisticated tools. And they don't endure well over billions of years. Higher forms of life -- larger, multicellular, and with more structure -- leave traces that are easier to detect. So far, the Mars rovers have found no obvious fossils big enough to be clearly observed and credible.

Most experts doubt that conditions on Mars could have supported the evolution of life beyond its most primitive forms.

"More evolved life...we would have seen fossils of it by now, and we haven't," McKay said. Yet the chemistry and the indications of water at both rover landing sites, he said, is certainly favorable for the development of microbial life.

Future orbiting and landing spacecraft are now being built to study Mars in far greater detail using more powerful devices than those utilized to date. "In my view, it's a terrible waste of landers not to have a life-detection instrument on every lander," McKay stated. "The public is smart enough to understand that a negative result doesn't mean there's no life on Mars."

There is fear within the Mars research community, McKay continued, that a negative result would essentially kill the program. "I don't think that's the case at all."

Up to now, Mars is a freeze-frame planet, profiled in camera clicks. In the near future, the prospects are good for streaming video to present the red planet in motion, as never seen before.

"I would love of have had a video of that Magic Carpet being pulled up. That might have made the point incredibly strong," McKay concluded.