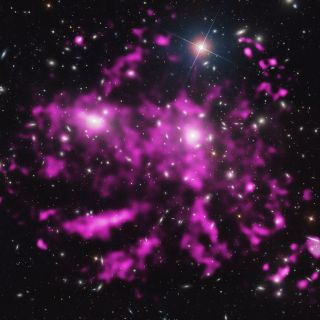 A nearby cluster of galaxies is reaching out into the universe with colossal plasma arms — galactic tentacles so long they are nearly five times the width of the Milky Way, astronomers say.

The discovery suggests the cores of turbulent galaxy clusters may be much less chaotic than scientists previously thought.

Using NASA's Chandra X-ray Observatory, astronomers have discovered titanic arms of plasma glowing brightly, with X-rays emanating from the core of the Coma Cluster. They can reach up to about 490,000 light-years long and 80,000 light-years wide, and researchers estimate these arms can get up to 40 billion times the mass of the sun.

Galaxy clusters are structures made up of hundreds to thousands of galaxies and hot, turbulent X-ray-emitting gas in between. One of the best studied galaxy clusters is the Coma Cluster, which holds more than 1,000 galaxies and lies about 300 million light-years away. It is approximately 20 million light-years wide, making it about 200 times wider than the Milky Way galaxy. [65 Amazing Galaxy Photos (Gallery)]

"It weighs around 1.5 quadrillion times the mass of the sun, which, by some estimates, is around 1,500 times the mass of the Milky Way," said study lead author Jeremy Sanders, an astronomer at the Max Planck Institute for Extraterrestrial Physics in Garching, Germany. "It was in Coma where some of the first evidence for the existence of dark matter was found, when Fritz Zwicky showed that its mass was a lot bigger than expected from the stars in it."

The strongest of these bright arms reaches out from the center of the Coma Cluster toward a small subgroup of galaxies, called NGC 4911, about 2.1 million light-years away. Researchers suggest the arms are composed of material stripped from a merger of Coma cluster with NGC 4911.

One way galaxy clusters grow is by merging with smaller galaxy subclusters.

"The subcluster merges because gravity is causing it to be attracted to the larger cluster — Coma," Sanders told SPACE.com. "It will typically fly into the cluster, accelerating, and pass the center. Then, the gravitational attraction from the main cluster will pull it back into the cluster, making a sort of orbit. This can continue until the cluster is dissolved into its surroundings."

When the pressure of material within the cluster pushes at the matter in the subcluster, "you basically get a trail of stripped gas showing where the subcluster has accelerated in and passed out of the center of the main cluster," Sanders said. One analogy for these arms "might be passing a smoke flare through the air, leaving a trail behind it," Sanders said. Another analogy would be "the idea of a contrail behind an aircraft — most of the water comes from the aircraft," he added.

Given the estimated timing of the merger between the Coma Cluster and NGC 4911, the researchers suggest the arms are probably about 300 million years old. That suggests that the core of Coma could be significantly less turbulent than previously thought.

"The cluster should be a messy place, with lots of turbulent motion taking place in the intracluster medium, but we see relatively straight, long-lasting streams that remain intact for several hundred million years," Sanders said.

How do they exist?

The researchers suggest magnetic fields help keep the arms intact against heat from the cluster that might otherwise dissipate the structures. The magnetic fields keep electrons from moving in the cluster in certain directions, reducing the flow of heat, Sanders explained.

Future research could investigate whether simulations of cluster formation can replicate these arms.

"What's going to be really interesting is when the Japanese launch the ASTRO-H X-ray observatory in the next year," Sanders added. "This is going to carry a new type of detector which will, for the first time, make detailed direct measurements of the gas motions in clusters and tell us how much turbulence there is. In Europe, we're also proposing to ESA a new X-ray observatory called Athena+, which we hope will be launched in 2028. This will go even further than ASTRO-H, making detailed images and spectra of galaxy clusters."

The scientists detail their findings in the Sept. 20 issue of the journal Science.