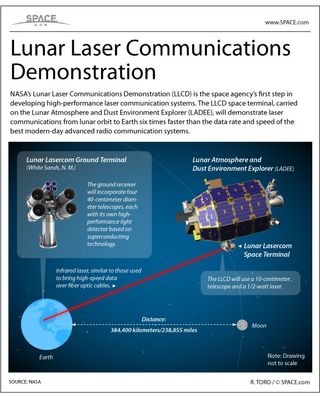 The LLCD space terminal is designed to beam data from the moon at a rate six times faster than the best advanced radio communications systems available today. The system consists of a laser mount on the LADEE spacecraft which fires a 0.5-watt laser through a 10-centimeter telescope.

The data laser beam will then traverse the 238,855 miles (384,400 kilometers) between the moon and Earth to a ground station. The primary ground station, called the Lunar Lasercom Ground Terminal, is located in White Sands, N.M., near Las Cruces and features a set of four 40-centimeter telescopes to receive the signal. Other receiving stations include NASA's Deep Space Network antennas in Madrid, Spain, and Canberra, Australia.