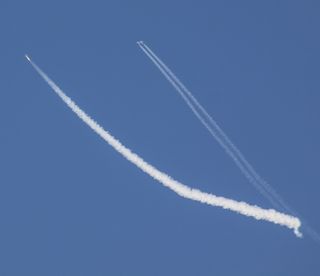 Virgin Galactic's SpaceShipTwo rises into the sky under rocket power on Sept. 5, 2013. At right is WhiteKnightTwo, the private space plane's mothership, which carried it into the sky.
(Image: © Kenneth Brown/Aerospace Photography)

Virgin Galactic's private spaceship flew higher and faster than it ever had before on Thursday (Sept. 5), giving company officials confidence that the vehicle is on track to start carrying passengers on suborbital jaunts next year.

In its second-ever rocket-powered test flight, which took off Thursday morning from the Mojave Air and Space Port in California, Virgin Galactic's SpaceShipTwo reached a maximum altitude of 65,000 feet (19,800 meters) and a top speed of Mach 1.6, or 1.6 times the speed of sound (which is about 761 mph, or 1,225 km/h, at sea level).

The six-passenger space plane got up to 56,000 feet (17,000 m) and Mach 1.2 during its only previous powered flight, which occurred on April 29. SpaceShipTwo's engine burned for 16 seconds during that first test, compared to 20 seconds on Thursday, Virgin Galactic officials said. [See photos of SpaceShipTwo's 2nd rocket-powered test flight]

SpaceShipTwo also demonstrated its unique re-entry mechanism during Thursday's flight, rotating its wings and tail upward into a "feather" position that officials say will enable a slow and steady descent. The vehicle had done this previously on unpowered "glide flights" but never in concert with a rocket firing.

"We are on track for a 2014 start of commercial service," Branson said in a video released by Virgin Galactic after Thursday's flight. "I can't wait to get up there."

Branson may be speaking for himself as well as the company in that last statement, for he has said that he and his family will be on SpaceShipTwo's maiden commercial voyage.

SpaceShipTwo takes off from a runway and is carried aloft by a plane called WhiteKnightTwo, which drops the vehicle at an altitude of about 50,000 feet (15,000 m). The spaceship's rocket engine kicks on at that point, blasting the vehicle into suborbital space.

Passengers aboard SpaceShipTwo won't complete a full orbit of Earth, but they will get a few minutes of weightlessness and a view of our planet against the blackness of space, Virgin Galactic officials have said.

SpaceShipTwo was built by the aerospace firm Scaled Composites, which also constructed the vehicle's predecessor, SpaceShipOne. SpaceShipOne won the $10 million Ansari X Prize in 2004 after becoming the first private craft to fly people to space and back twice in the span of a week.