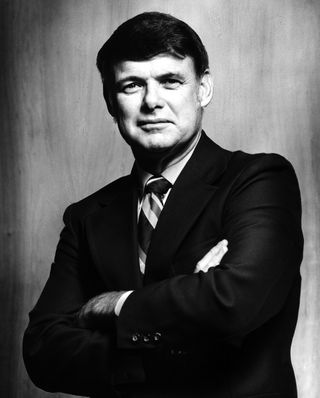 Flags have been lowered to half-staff at NASA's Jet Propulsion Laboratory (JPL) in Pasadena, Calif., to honor the passing of its former director, planetary scientist Bruce C. Murray, who died today (Aug. 29) at age 81 after a long illness.

Murray led JPL from 1976 to 1982, during a period of several landmarks for the exploration of our solar system. Viking 1 and 2 landed on Mars in the summer of 1976, becoming the first American spacecraft to touch down on the Red Planet. Soon after, the ambitious Voyager 1 and 2 missions were launched; the spacecraft flew by Jupiter and Saturn, snapping the first detailed images of the two huge gas giants and their moons.

Though Murray ran up against serious budget cuts during his tenure, but he brought several important projects to JPL, including the joint Netherlands/United Kingdom/U.S. Infrared Astronomy Satellite. He also salvaged the Galileo mission, which eventually launched in 1989 and was the first spacecraft to examine Jupiter and its moons for an extended period.

"He worked tirelessly to save our nation's planetary exploration capability at a tumultuous time when there was serious consideration for curtailing future missions," current JPL director Charles Elachi, said in a statement. "Long after returning to Caltech as a professor he continued to be an important voice in expressing the importance of space exploration."

In 1979, Murray co-founded the Planetary Society with the late astronomer Carl Sagan and engineer Louis Friedman. The nonprofit group, which still exists today, is dedicated to exploring the solar system and directs several citizen-funded initiatives. (Its current CEO is Bill Nye.)

Murray earned his doctorate in geology from MIT. After a stint at Standard Oil, he served two years in the U.S. Air Force and then jointed Caltech in 1960, working in planetary astronomy, according to a statement of JPL.

Before coming to the helm of JPL, he played an important role on the science teams for lab's early Mariner missions, using images captured by the spacecraft to start constructing a geologic history for the Red Planet. He was also part of the Mariner 4 imaging team that captured the first close-up of Mars in 1964. After leaving NASA, Murray became a professor of planetary science and geology at Caltech.

Murray is survived by his wife, Suzanne Moss, five children and grandchildren.