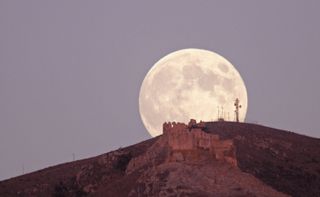 Stefano De Rosa captured this image of the “Blue Moon” of Aug. 20, 2013 as it rose over ancient Volterraio Castle, which overlooks the Gulf of Portoferraio on the Italian island of Elba.
(Image: © Stefano De Rosa | www.stefanoderosa.com)

The most ancient fortification on the Italian island of Elba was greeted by a massive full moon rising in this amazing photo.

Photographer Stefano De Rosa’s "carefully planned shot" of Aug. 20 brilliantly captured this season’s "Blue Moon" as it loomed over Volterraio Castle — a deteriorating stronghold of old that overlooks the Gulf of Portoferraio, a few miles from the city of Portoferraio.

De Rosa's image is one of many amazing photos of the Blue Moon captured by photographers and amateur astronomers around the world this month.

The name "Blue Moon" signifies the third full moon in a season with four full moons. It doesn't necessarily appear any different from other full moons during the year. Another Blue Moon definition refers to the Blue Moon as the second full moon in a single month. The special name was given to give stargazers an excuse to look up at the night sky.

SPACE.com was flooded with dazzling Blue Moon photos by stargazers and readers. We got submissions from areas all over the United States, other parts of the Northern Hemisphere and countries in the Southern Hemisphere.