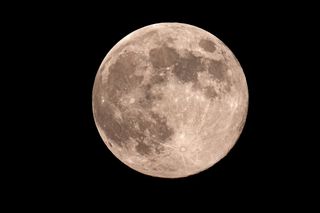 Although yesterday's (Aug. 20) full moon didn't look visibly different from other full moons during the year — the Blue Moon moniker simply denotes the third full moon in a season with four full moons — stargazers used the specially named moon as an excuse to look up at the sky for a night.

SPACE.com was flooded with amazing photos of the Blue Moon from readers and stargazers. We got submissions from areas all over the United States, other parts of the Northern Hemisphere and countries in the Southern Hemisphere. [Blue Moon Photos: August Full Moon of 2013 in Pictures]

"This evening I battled hordes of mosquitoes to capture as perfectly timed a 'Blue Moon' as I possibly could," Jadwin, Mo.-based space photographer Victor Rogus told SPACE.com via email. "I used an atomic clock to be as precise as possible in this endeavor."

"[It was a] beautiful, romantic sight, despite the invading hordes of insects, but I caught a nice image," Rogus added.

One skywatcher in Australia saw a few familiar shapes on the Blue Moon.

"My wife pointed out the man on the moon followed by a elephant, monkey, camel and a horse," Michael Holliday told SPACE.com via email.

What's in a Blue Moon?

While the third full moon in a four-full-moon season is the technical definition of a Blue Moon, the term is also often applied to another kind of moon. An article in "Sky & Telescope" magazine in 1946 mistakenly defined a Blue Moon as the second full moon in a month, and the term stuck.

Last night's full moon met the technical definition of a Blue Moon, but not the secondary classification.

The term Blue Moon also has nothing to do with the color blue. But at times the moon can take on a blueish glow from Earth when a volcano or a forest fire spews smoke and ash into the upper atmosphere.

Another Blue Moon will not occur again until 2015, but if you didn't catch last night's full phase, tonight's moon will also look full (weather permitting) to most casual observers.

Editor's note: If you have an amazing photo of last night's full moon, or any other night sky sight, and you'd like to share it for a possible story or image gallery, please contact managing editor Tariq Malik at spacephotos@space.com.