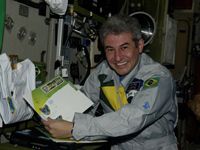 TheBrazilian Space Agency (Ag?ncia Espacial Brasileira, or AEB) honored the ongoingspaceflight of their nation's first astronaut, MarcosPontes, with the introduction of commemorative stamps and coins during a Mondayceremony.

The stamps, of which there are three that form a single panoramic image, willbe limited to a run of one million each and carry a face value of R$ 0,85(approximately 39 cents U.S.).

Like Pontes' flight, which has been entitled Miss?oCentario (the Centennial Mission), the stamps also honor thecentennial of the first heavier-than-air flight by Brazilian aviator AlbertoSanto-Dumont in 1906. In addition to Santos-Dumont's 14-bis flying machine, thepanes depict a Soyuz launch, orbiting spacecraft, the International SpaceStation (ISS) and Pontes' personal mission insignia.

The medallions, to be minted in silver and bronze, also display the 14-bis, ISSand Soyuz on one side with the image of a spacewalking astronaut on itsreverse. The phrase, "1? v?o brasileiro no espa?o" (1st Brazilianflight into space) also appears. The coins will be available to collectors forR$ 135,00 bronze ($61 US) and R$ 185,00 silver ($84 US).

A similar ceremony will be held later in Bauru, Pontes' hometown. AEB and ECTofficials will attend, along with members of the astronaut's family.

For his part, Pontes is flying - and will later donate - three of themedallions and six stamps, the latter of which he will cancel on the ISS. Thecoins, one each, will be given to Brazil's president, AEB and the Mint. Stampswill also go to the AEB and President, as well as to the Santos-DumontAerospace Museum, the Brazilian Aerospace Memorial and the National PostalMuseum. The remaining carried stamp will be auctioned to benefit project FomeZero, an effort to end hunger in Brazil.

Marcos Pontes launchedinto space on March 29 from the Baikonur Cosmodrome in Kazakhstan. Onboard the SoyuzTMA-8 spacecraft with him were ISS Expedition13 crew members Pavel Vinogradov and Jeffrey Williams. Pontes enteredthe space station early Saturday, and is now spending a science-filled week in spacebefore returning to Earth with the ISS Expedition12 crew.

In addition to the stamps and coins, Pontes also flew a jersey from Brazil'sfive-time World Cup champion soccer team and a Brazilianflag. The latter, Pontes said before his flight, was his most importantpayload. "Actually, I am going with the flag, not the flag going withme," he told reporters. The deep green banner displays constellations asseen in the Southern Hemisphere skies above Brazil.