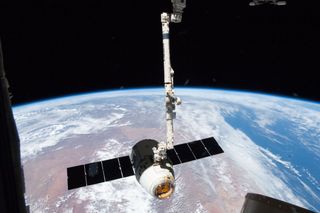 This image is one of a series of still photos documenting the process to release the SpaceX Dragon-2 spacecraft from the International Space Station on March 26, 2013.
(Image: © NASA)

The private spaceflight firm SpaceX has notched a key milestone in its quest to launch humans to orbit, adding to an already eventful week for company founder and CEO Elon Musk.

SpaceX has completed a preliminary design review of the systems necessary to support astronauts in orbit and return them safely to Earth aboard the company's Dragon spacecraft, NASA officials announced Thursday (Aug. 15).

SpaceX is one of three companies — along with Boeing and Sierra Nevada Corp. — to receive funding in the latest round of awards from NASA's Commercial Crew Program. NASA hopes at least one privately developed American spaceship can begin flying astronauts to and from the International Space Station by 2017.

During the recent design review, which took place at SpaceX headquarters in Hawthorne, Calif., company engineers explained to NASA and industry experts how Dragon would keep up to seven astronauts safe on orbit and during re-entry and landing.

The review also discussed how onboard crews and ground controllers would operate Dragon, and it covered the software that would help guide crews to the orbiting lab for rendezvous and docking, NASA officials said.

The newly completed review follows a similar procedure performed in December for ground systems and the ascent phase of a potential manned mission. SpaceX is now cleared to proceed with detailed designs for its entire manned transportation system, consisting of Dragon, the company's Falcon 9 rocket and associated ground infrastructure.

While the manned version of Dragon is under development, its robotic counterpart is already a spaceflight veteran. Dragon has made three unmanned trips to the space station, two of them bona fide cargo runs under a $1.6 billion contract SpaceX holds with NASA to make 12 such flights.

Grasshopper and Hyperloop, too

SpaceX has other irons in the fire apart from Dragon and the Falcon 9. For example, the company is developing Grasshopper in the hopes of achieving a long-held dream — fully and rapidly reusable rockets, which Musk says could slash the cost of spaceflight by a factor of 100.

Over the past few months, Grasshopper has been flying higher and higher on a series of increasingly ambitious test flights. But on Tuesday (Aug. 13), the rocket performed a new maneuver, rising 820 feet (250 meters) into the air and then moving 328 feet (100 m) sideways before returning back to the center of its launch pad.

"Diverts like this are an important part of the trajectory in order to land the rocket precisely back at the launch site after re-entering from space at hypersonic velocity," SpaceX officials said in a statement about the flight.

The test was part of an early-week whirlwind for Musk. On Monday (Aug. 12), after teasing the world for a year about the Hyperloop, the billionaire entrepreneur finally revealed his design for the futuristic concept, which Musk envisions as a fifth form of terrestrial transportation alongside cars, boats, planes and trains.

The solar-powered Hyperloop, Musk said, would blast passenger-packed pods through long tubes at 760 mph (1,220 km/h) or so, potentially cutting travel time between Los Angeles and San Francisco to 30 minutes.

Elon Musk also said Monday that he may wish to build a prototype of the Hyperloop to help get the concept off the ground, if his demanding schedule — in addition to SpaceX, Musk also runs the electric-car firm Tesla Motors — allows it.

"I'd like to see something like this happen," Musk told reporters Monday. "I don't really care much one way or the other if I have any economic outcome here. But it would be cool to see a new form of transport happen."