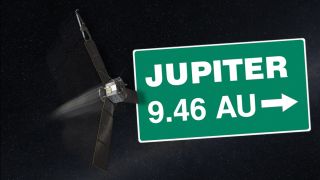 A NASA spacecraft has hit the halfway mark of its five-year voyage to the solar system's largest planet: Jupiter.

The odometer on NASA's Juno probe clicked over to 880 million miles (1.415 billion kilometers) on Monday (Aug. 12), space agency officials said. That means the spacecraft is halfway to Jupiter, at least in terms of distance traveled, they added.

The $1.1 billion Juno mission launched in August 2011 and will arrive at the Jovian system in July 2016. The probe is taking an indirect, looping path to its destination, with a close Earth flyby scheduled two months from now to provide a dramatic speed boost.

"On Oct. 9, Juno will come within 347 miles (559 km) of Earth," Juno project manager Rick Nybakken, of NASA's Jet Propulsion Laboratory in Pasadena, Calif., said in a statement. (Juno was 34.46 million miles, or 55.46 million km, from Earth when the halfway milestone was reached on Monday morning, officials said.)

Once Juno reaches Jupiter, it will circle the planet for a full Earth year, making 33 orbits from pole to pole. The spacecraft will use its eight science instruments to study the gas giant's atmosphere, gravitational field and magnetic field.

Juno's observations should reveal a great deal about Jupiter's origins, structure and composition, including whether or not it possesses a solid core, researchers said.

The mission is named after the goddess Juno in Greek and Roman mythology.In the myth, the god Jupiter (or Zeus, in the Greek version) used clouds to hide his acts of mischief, but his wife Juno was able to peer through the veil to see her husband's antics, according to a NASA description.

The 8,000-pound (3,267 kilograms) Juno probe is the first solar-powered spacecraft ever to visit the outer solar system.Juno has three huge solar arrays, each of which is the size of a tractor-trailer.