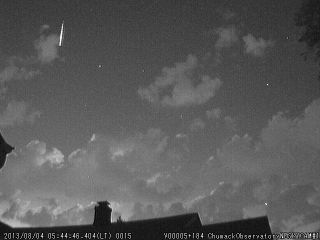 When the annual Perseid meteor shower peaks tonight and Monday (Aug. 11 and 12), dusty fragments ripped from the tail of comet Swift-Tuttle will burn up in Earth's atmosphere, leaving streaks of light across the sky.

But the dime-sized extraterrestrial leftovers that cause this stunning show represent just a fraction of the interplanetary material that collides with Earth all the time. Each day alone, 10 to 40 tons of invisible meteoric dust ploughs into the atmosphere, according to NASA. Scientists trace those fragments to learn more about the high-altitude weather systems that surround Earth.

The Perseid meteor shower occurs in mid-August each year when Earth travels through a region of the solar system that's swarming with debris from the tail of comet Swift-Tuttle. Even though each of these bits of debris is only about the size of a dime, intense friction is created when they zip through the gas surrounding our planet, making them burn bright enough to be visible from the ground, according to NASA scientists. [How to See the 2013 Perseid Meteor Shower]

You can watch live Perseid meteor shower webcasts on SPACE.com tonight, courtesy of NASA and the Slooh Space Camera.

But Perseids aside, the Earth's atmosphere experiences a more regular, subtle onslaught from interplanetary dust — smaller, older meteoroids, that are no wider than a strand of human hair, traveling at 7 to 44 miles per second (11 to 70 kilometers per second).

"The fragments are either remnants from the solar system's formation, or they are produced by collisions between asteroids or comets from long ago," Diego Janches, who researches micrometeoroids at NASA's Goddard Space Flight Center in Greenbelt, Md., said in a statement.

These fragments litter the atmosphere with minerals and metals, including sodium, silicon, calcium and magnesium, which can serve as useful tracers for scientists.

"The small meteoroids feed the atmosphere with all these extra materials," Janches explained in a statement from NASA. "They come in, release metallic atoms that get deposited in the mesosphere and then get pushed around from pole to pole by the general global circulation. So by using the metals as tracers, you can answer some important questions about the general composition and movement of the atmosphere."

For example, scientists can follow these fragments to gather minute data on the speed and direction of the background atmospheric winds at altitudes of 40 and 60 miles (65 to 100 km) high.

Though the tinier pieces of meteoric dust don't put on spectacular shows like the Perseids or the Leonids, they can create other dazzling cosmic phenomena in the night sky. When the global circulation system sweeps these fragments to the regions high above Earth's poles, they can act as the seeds of the ice crystals that form rare clouds called noctilucent clouds, which shine brightly at night, researchers say.