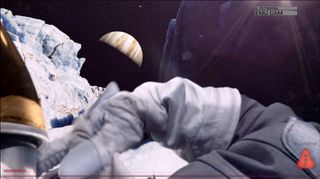 An astronaut works outside a spacecraft cockpit in this still from the 2013 science fiction film ‘Europa Report.’
(Image: © Wayfare Entertainment)

"Europa Report" is a beautiful and terrifying movie.

The directing, cinematography and acting together create an experience that simultaneously shows the awesome and horrifying nature of spaceflight.

While the non-chronological plot documenting the imagined first-ever manned trip to Jupiter's icy moon Europa can be somewhat difficult to follow, it builds some major tension that courses through the entirety of the film. From the very beginning, the audience knows that something went wrong during the mission, but the script dances around what it is. [See photos from Sci-Fi Film "Europa Report"]

By using a "found footage" format laced with documentary-style interviews, director Sebastian Cordero and the production team are able to reveal the truth about the fate of the mission on their own timeline, in a somewhat horror-movie–like fashion.

The movie centers on the fictional private spaceflight company Europa Ventures and its Europa 1 mission. About nine months into the flight, which the screenplay calls the first manned mission outside of low-Earth orbit since the 1970s, the ship loses communications with Earth. Despite this setback, the international team of six astronauts continues on with their mission to search for evidence of life in the solar system — and chaos (plus some science) ensues.

The filmmakers make an effort to stay firmly within the rules of the world they have created. It just so happens that many of those rules overlap with the reality of what scientists understand about Europa and spaceflight today.

Instead of creating a completely imagined idea of what the moon could be like, the production team crafted Europa in a style that fits within science's current understanding of the mysterious moon. The film's team asked two scientists working at NASA's Jet Propulsion Laboratory in Pasadena, Calif. — Kevin Hand and Steven Vance — to consult during production and post-production of the film.

The scientists portrayed as flying on Europa 1 aren't one-dimensional shells; instead, they have a seemingly rich understanding of their profession and what hangs in the balance for the people of Earth. These spacefarers know that the discoveries they make on Europa could change the course of human history, like any astronaut traveling into deep space probably would.

Some of the scenes are beautiful, as well. The first close-up glimpse of the surface of Europa looks alien and yet familiar. The icy cliffs and valleys seem like they could have been shot from the Himalayan Mountains, but the sky is wholly unfamiliar. Jupiter looms in the distance, occasionally obscured by interference from the extreme radiation affecting the cameras and humans on the planet's moon.

The overall plot does strain the imagination, though. It is somewhat unlikely that a trip to Europa would be the first deep-space destination, even for a private spaceflight company. It is probably more likely that a space agency or firm would first hone their skills by sending a crew to Mars or a nearby asteroid before flinging astronauts so far into deep space. But that bit of artistic license is forgivable.

Overall, any space nerd will appreciate the attention Cordero and his team paid to detail. The filmmakers used footage from NASA's Juno launch to Jupiter as a stand-in for the launch of Europa 1, and their rotating space ship looks like the kind of place a crew could live comfortably during their trek to the far-off moon.

"Europa Report" is in theaters and can be watched through video on demand services now.