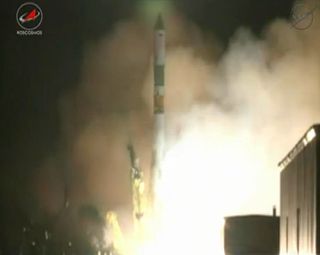 A Russian Soyuz rocket launched an unmanned resupply ship to the International Space Station Saturday (July 27) for an express delivery to the orbiting outpost. The vehicle will be delivering food, supplies and the last-minute addition of a repair kit for a U.S. spacesuit that malfunctioned during a spacewalk last week.

The robotic Progress 52 spacecraft and its Soyuz rocket lifted off at 4:45 p.m. EST (2045 GMT) from the Baikonur Cosmodrome in Kazakhstan, where it was early morning Sunday.

The cargo ship is loaded with nearly 3 tons (2.7 tonnes) of food, fuel, supplies and science experiment equipment for the six-person crew of the station's Expedition 36 mission.Among its cargo is a set of tools intended to help the astronauts investigate and patch up the spacesuit that malfunctioned during a July 16 spacewalk outside the orbiting laboratory.

That spacewalk was terminated early after just 92 minutes when water began to leak into the helmet of spacewalker Luca Parmitano, an Italian astronaut with the European Space Agency. Parmitano and his fellow spacewalker Chris Cassidy of NASA aborted the excursion, which was intended to perform maintenance work to prepare the space station for the arrival of a new Russian module later this year. [See photos from the aborted spacewalk]

"The investigation is ongoing, troubleshooting is ongoing to try to isolate the exact cause of the water intrusion into Luca Parmitano's helmet," NASA spokesman Rob Navias said during launch coverage on NASA TV today.

Progress 52's express trip will bring it to the space in station in just six hours, docking after only four orbits of the planet — a shorter journey that's been adopted recently to save vehicles time on a trip that used to take multiple days. The spacecraft is expected to link up with the space station's Earth-facing Pirs port on Saturday night at 10:26 p.m. EDT (0226 July 28 GMT), NASA officials said.

The launch comes just two days after another Progress resupply vehicle filled with trash and an astronaut treadmillwas cast off from the space station to be burned up over the Pacific Ocean as it re-entered Earth's atmosphere.(Progress ships are disposable spacecraft.)

The next space station resupply delivery craft — the H-II Transfer Vehicle-4 from the Japan Aerospace Exploration Agency — is scheduled to lift off on Aug. 3 from Japan's Tanegashima Space Center. It will ferry 3.6 tons (3.2 tonnes) of dry cargo, water, experiments and spare parts to the orbiting laboratory, according to NASA.

The space station is about the size of a five bedroom house with the wingspan of a football field. The $100 billion facility, built by five space agencies representing 15 countries, has been staffed continuously with rotating crews of astronauts since 2000.