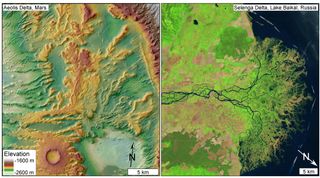 Scientists have spotted more evidence that an enormous ocean on Mars covered much of the planet's surface billions of years ago.

The latest clues were found in photos from NASA's powerful Mars Reconnaissance Orbiter circling the planet. The images show what appears to be an ancient river delta, which may have emptied into a vast Martian ocean that inundated up to one-third of the Red Planet long ago, a new study reports.

"Scientists have long hypothesized that the northern lowlands of Mars are a dried-up ocean bottom, but no one yet has found the smoking gun," study co-author Mike Lamb, an assistant professor of geology at the California Institute of Technology (Caltech) in Pasadena, said in a statement. [Photos: The Search for Water on Mars]

The new study does not provide the long-sought smoking gun, researchers stressed, but it further bolsters the hypothesis.

The team studied high-resolution images of a slice of the northern lowlands snapped by the HiRise camera aboard NASA's Mars Reconnaissance Orbiter, which can distinguish features as small as 10 inches (25 centimeters) on the Red Planet's surface.

The small section of Aeolis Dorsa features many ridges called inverted channels, which form in river bottoms over time when coarse material, such as gravel, is deposited by flowing water. Inverted channels can linger long after the rivers that created them have evaporated, helping researchers trace the past activity of liquid water on Mars.

HiRise images allowed the study team to do just that in the section of Aeolis Dorsa they examined. They found that the inverted channels spread out markedly and slope steeply downward near their end, just as streams here on Earth do when they approach and empty into the sea.

Ancient river deltas have been discovered on Mars before. But most of them have been spotted inside craters or other geologically bounded regions, providing evidence for lakes but not global oceans, researchers said.

The newfound delta is different.

"This is probably one of the most convincing pieces of evidence of a delta in an unconfined region — and a delta points to the existence of a large body of water in the northern hemisphere of Mars," lead author Roman DiBiase, a postdoctoral scholar at Caltech, said in a statement.

Just how big this body of water was remains an open question. It would at least have flooded all of Aeolis Dorsa, covering about 38,600 square miles (100,000 square km), researchers said. And it might even be the long-hypothesized global ocean, which some scientists suspect covered a third of Mars.

It's possible that the Aeolis Dorsa delta was once confined by a crater or other feature that has since completely eroded. However, this interpretation implies that the Martian surface is more geologically active than scientists think, team members said.

The researchers plan to continue searching for signs of the potential ocean along its coastline, in an attempt to shed more light on the Red Planet's warmer and wetter past.

"In our work and that of others — including the Curiosity rover — scientists are finding a rich sedimentary record on Mars that is revealing its past environments, which include rain, flowing water, rivers, deltas and potentially oceans," Lamb said. "Both the ancient environments on Mars and the planet's sedimentary archive of these environments are turning out to be surprisingly Earth-like."

The study was published online in the July 12 issue of the Journal of Geophysical Research.