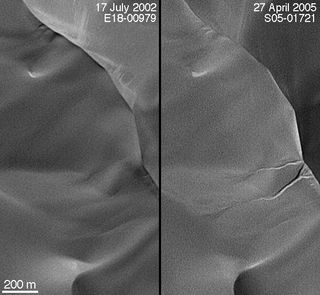 Martian gullies that some scientists believe were recently carved by liquid water might instead be the result of landslides triggered by wind and meteor impacts, scientists say.

The idea is based on new findings that the Moon, where no liquid water has been found, contains gullies similar to those found on Mars.

Gwendolyn Bart, a graduate student in planetary sciences at the University of Arizona, presented her findings last week at the 37th Lunar and Planetary Science Conference in Houston.

Many scientists think Mars was a planet once drenched in water, at least for periods of time: its surface contains canyons larger than any found on Earth. NASA's Mars rover Opportunity has found BB-like spheres and layered deposits of sandstone that many scientists believe could have only formed under conditions in which large bodies of water existed at or near the Martian surface for long periods of time.

But these findings only confirm the presence of Martian water in the ancient past. Whether liquid water ever exists on the planet now is a subject of debate among scientists.

In 2000, NASA scientists announced that the Mars Global Surveyor, or MGS, satellite had detected gullies apparently formed from water trickling up from just below the surface. Based on the images, some scientists concluded that liquid water flowed on Mars' surface in the recent past, sometime within the last million years, and that liquid water might still exist on the planet in subsurface reservoirs.

Bart and other scientists are skeptical of the finding because Mars' temperature and pressure are so low that liquid water can only exist for short periods of time before freezing or evaporating.

"I would think that if there's some non-water process that could form it, it would be more likely," Bart said in a telephone interview.

Last year, Bart heard a talk by Allan Treiman, a senior scientist at the Lunar and Planetary Institute, who believes Martian gullies can be explained without resorting to explanations involving recent water.

"It's completely possible that there's no water involved at all and that what we're seeing are just dry flows of dust and sand," Treiman told SPACE.com. "You can get massive flows of material that's completely dry and ends up having pretty much the same shape as if they were wet."

Recently, Bart was studying high-resolution images of the lunar landscape images taken in 1969 when she came across features on the waterless Moon that looked strikingly similar to gullies on Mars. She realized that the lunar gullies might be evidence for Treiman's hypothesis.

"If the dry landslide hypothesis for the formation of Martian gullies is correct, we might expect to see similar features on the moon, where there is no water," Bart said. "We do."

Specifically, Bart found that gullies on the 10-mile-wide (17 kilometer) lunar crater Dawes were similar in size and structure to those in a Martian crater photographed by the MGS. Scientists think micrometeorites striking the smooth slope and crater on the lunar surface triggered small avalanches, creating the gullies. The same process could be behind the Martian gullies, Bart said.

Treiman points out, however, that the lunar gullies are much older than the ones on Mars. Unlike some of the Martian gullies, the lunar ones are pockmarked by meteorite and micrometeorite impacts. This gives the lunar gullies a degraded and softened look, Treiman said, and could lead some scientists to doubt whether the features in Dawes crater really are gullies.

"For my money, [the lunar gullies] look like pretty good analogues of the Martian ones, but I'd love to see something fresher," Treiman said.

For new detailed maps of the lunar surface, scientists may have to wait until 2008, when NASA's Lunar Reconnaissance Orbiter is expected to launch.