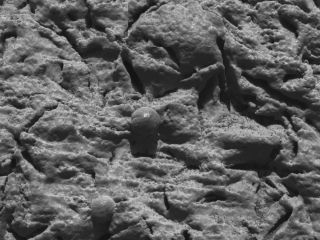 Among the signs of water at Opportunity's location are the round, BB-sized particles like these seen in a mosaic from the microscopic image taken at the rock outcrop dubbed 'Guadalupe.' These spherules are not concentrated at particular layers within the rock, as they would likely be if they originated outside the rock and were deposited onto accumulating layers while the rock was forming. Image
(Image: © NASA/JPL/US Geological Survey)

Editor's Note: This update includes the views of Mars RoverPrincipal Investigator Steven Squyres, who was not contacted prior topublication of the initial version of the article.

The apparent discoveryof ancient salty bodies of water on Mars by NASA's Opportunity rover last yearis viewed as one of the most significant developments in planetary science.

Rather than abundant surface water oversignificant stretches of planet's history, as has been widely reported,Opportunity's observations might represent the results of a meteor impact orvolcanic activity on an otherwise very dry world.

The counter arguments, presented in twopapers in the Dec. 22 issue of the journal Nature, go to the very heartof the ultimate question about Mars: Was it ever warm and wet enough to supportlife?

The new reports, however, are based on theinitial data from the Opportunity rover during its first 45 days on Mars.

The Mars rover mission's PrincipalInvestigator, Steven Squyres of Cornell University, said both of the newstudies could not take into account more recent data from Opportunity that werenot available to the researchers.

At Meridiani Planum, Opportunity foundphotographic evidence of layeredsandstone that, when analyzed by chemical sensors, looked like it must have formed in the pryeesenceof significant amounts of water.

Today, Squyres told SPACE.com thathis team's interpretation has always been that the water was mostlyunderground, sometimes seeping to the surface only to evaporate quickly."From the start, the media has overemphasized surface water andunderemphasized the underground water," he said.

In one of the new reports, scientistsconclude the deposits could be nothing more than volcanic ash altered by verysmall amounts of acidic water and sulfur dioxide, which is a volcanic gas. Theresearch was done by Thomas McCollom and Brian Hynek of the University ofColorado at Boulder.

"In our scenario, the water required tosupport the chemistry in this bedrock would only have had to have been aroundfor months, years or perhaps as much as a few centuries," Hynek saidtoday.  "This is very different than previous scenarios, whichrequire that a much larger amount of water be present for many millennia."'

"This scenario does not requireprolonged interaction with a standing body of surface water," the McCollomand Hynek write.

The Meridiani region was probably more likevolcanic parts of Yellowstone, Hawaii or Italy than something like the GreatSalt Lake, McCollom said.  "We think it was far less favorable forpast biological activity than other scenarios that have been proposed."

If McCollom and Hynek's scenario is correct,its effect would be in "greatly reducing the possibility that these rocksindicate that a habitable environment ever existed at Meridiani,"according to Mark Bullock, a scientist at the Southwest Research Institute whowas not involved in the studies.

In the second paper, another group says animpacting space rock can explain the chemicals and layered deposits observed atMeridiani, as well as the infamous BB-sized spheres dubbed blueberries.

In fact, write Paul Knauth of Arizona StateUniversity and colleagues, the blueberries are just too spherical and ofuniform size to be explained by formation in water.

Knauth's team proposes that the meteoritegenerated a "ground-hugging turbulent flow of rock fragments, salts,sulfides, brines and ice," leaving deposits that were later weathered bysmall amounts of water embedded in the grains.

The scenario "can account for all ofthe features observed without invoking shallow seas, lakes or near-surfaceaquifers," the scientists contend.

There is little doubt that Mars, in itsearly history, experienced bouts of intense flooding that involved water. Theevidence is plainly carved into the planet's surface in the form of canyonsbigger than any on Earth. But Bullock said those early episodes could haveinvolved very sudden and short-lived floods spurred by ice melting in meteoriteimpacts that would have been frequent when the solar system was young.

"Both groups propose scenarios thatpreclude the existence of significant bodies of water at the surface (at leastat Meridiani), and therefore that Mars may never have had conditions conduciveto life," said Bullock, who wrote an analysis of the work for Nature."This conclusion stands in sharp contrast to the provocativeinterpretations that there must have been long-lived surface water to form theMeridiani outcrops."

Squyres said a deeper understanding of thesituation came when Opportunity examined Endurance Crater, where observationswere made of 25 vertical feet of rock outcrops. Those results were publishedjust a month ago, after the two Nature papers had been submitted.

The nature of the layering and grain sizesdeeper inside Endurance Crater "is absolutely incompatible with a volcanicor impact origin," Squyres said. It is "completely compatible"with the idea of windblown material, and the upper meter or so "showsevidence for deposition of water. The chemistry varies with depth in a way thatrequires that subsurface liquid water interacted with the rocks after they weredeposited."

Squyres emphasized that his team has alwaysthought the water was mostly underground, occasionally creating small surfacelakes that evaporated quickly.

Squyres also stressed that nobody has doneanything other than good science with the data available. "It's alwaysgood to have alternative hypotheses," he said. "In the end, the bestideas win. It forces everybody to go back and sharpen their arguments. All ofthis is a good thing."

It will take time for scientists to settlethis important debate. The outcome could effect decisions about where to sendfuture missions that would search for signs of life. Bullock called theinvestigation vital, "whatever the ultimate verdict proves to be."