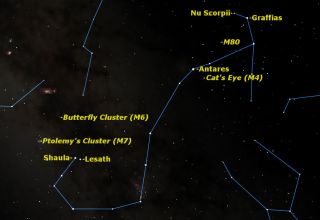 For observers in the Northern Hemisphere, the constellation Scorpius appears low in the southern sky on warm June evenings.
(Image: © Starry Night Software)

Most of the constellations seem pretty much random arrangements of stars to modern eyes. Scorpius is one of the few which actually resembles its namesake, the Scorpion.

As seen by observers in the Northern Hemisphere, Scorpius appears like a giant scorpion peeking over our southern horizon. With a fairly small body, marked by the red giant star Antares, the scorpion has three stars in front representing its claws, and a long curving tail behind, ending in two bright stars marking its stinger. If you live in Canada or the northern USA, part of the Scorpius' tail will be below the horizon, but more southern observers will see the whole beast of a constellation.

Antares (Alpha Scorpii) is one of the brightest stars in the sky, and one of the few with an obvious red color. This color reminded ancient observers of the red planet Mars, hence its name, which means "not Mars," Ares being the Greek for Mars. In large amateur telescopes, this red giant is seen to have a tiny companion star. Because of the primary star's vivid red color, the companion often appears greenish, which is an optical illusion, since there are no green stars. [Amazing Night Sky Photos: June 2013]

Of the stars making up the Scorpion's claws, Graffias (Beta Scorpii) and Nu Scorpii are both double stars. Both are easily split in even the smallest telescope. The stars in Graffias are relatively close, 14 arc seconds apart, while those in Nu Scorpii are much farther apart, 41 arc seconds, visible in binoculars. Both pairs are quite unequal in brightness, about 2 magnitudes difference between the two stars.

The stinger at the end of the scorpion's tail consists of two stars, Shaula and Lesath. These appear as a double star to the naked eye, sometimes called the "Cat's Eyes." They point to one of the brightest and most beautiful open star clusters in the sky, Messier 7. This was first described by Claudius Ptolemy in the 2nd century, so sometimes is known as "Ptolemy's Cluster." Just above this cluster is another one, equally bright and beautiful, known as Messier 6 or the "Butterfly Cluster." Both are visible to the naked eye, but reveal their true beauty in binoculars or a small telescope.

Just above these clusters, and just over the border in the constellation Sagittarius, is the black hole at the center of our Milky Way Galaxy. The black hole itself is of course invisible, but the area is rich in stars.

Moving back up to Antares, if you look just below it with binoculars, you will see a fuzzy patch. In a moderate sized amateur telescope this resolves into one of the finest globular clusters in the sky, known as Messier 4 or the Cat's Eye. (Yes, it's confusing to have two Cat's Eyes in the same constellation, but one a pair of stars and the other a globular cluster.)

About half way between Antares and Graffias is another smaller globular cluster, Messier 80, also a fine sight in a telescope.

Scorpius thus offers many treats to any stargazer, whether equipped with binoculars, a telescope, or nothing but their own eyes.

Editor's note: If you snap an amazing photo of the night sky and you'd like to share it for a possible story or image gallery on SPACE.com, please send images and comments, including equipment used, to managing editor Tariq Malik at spacephotos@space.com.