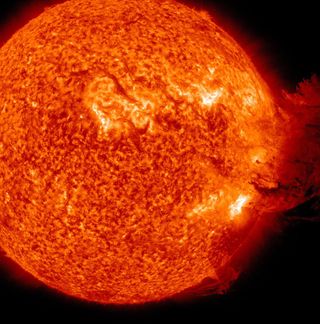 A stunning eruption unleashed by the sun two years ago is providing clues about how stars form, scientists say.

On June 7, 2011, the sun blasted out an enormous cloud of superheated plasma called a coronal mass ejection. Some of this material rained back down on the sun in a dazzling display that researchers say is helping them understand how newborn stars suck up plasma from their surroundings.

"This opens the way to new studies that link the sun to young stars, by both solar and stellar physicists," said study lead author Fabio Reale, of the University of Palermo and the Palermo Astronomical Observatory in Italy. [Watch video of the spectacular June 2011 solar eruption]

Newly forming stars siphon off material from a surrounding circumstellar disk. Such accretion plays a key role in the late phases of star formation, but the complex dynamics of the process — which involves plasma slamming into the stellar surface at hundreds of miles per second — make it difficult to understand in detail, researchers said.

The June 2011 solar eruption provides a window into the accretion process, Reale and his colleagues said. They studied images of the dramatic sun storm snapped by NASA's Solar Dynamics Observatory spacecraft in ultraviolet (UV) and extreme-UV light, and then compared those observations against the results of hydrodynamic simulations.

Impacts were spread over a large fraction of the solar surface, researchers said. Sun-striking plasma blobs typically measured between 1,250 and 2,500 miles (2,000 to 4,000 km) in diameter, and they generated detectable high-energy emissions when they crashed into the sun.

"The analysis of the high-energy light should be able to tell us about the composition of the disk material," he told SPACE.com via email.

It may seem odd that observations of this solar system's 4.5-billion-year-old sun can yield insights about stars just bursting into existence. But scientists use templates and proxies to investigate phenomena all the time, Reale said.

"Some physical processes are universal," he said. "If we can zoom in, and make the correct scaling and extrapolations, they can be investigated in different — even very different — systems. The sun has been used to study much brighter stellar coronae and flares, for instance. Probably, even people studying accretion in neutron stars or black holes may find this work interesting."

The new study was published today (June 20) in the journal Science.